I SEE A DARK STRANGER (aka: THE ADVENTURESS)

A wonderfully realized, well-crafted and highly entertaining British espionage thriller that’s part spoof and part Hitchcockian suspense. It’s tersely co-written and directed by Frank Launder (“Wee Geordie”/”The Belles of St. Trinian’s”/ “Captain Boycott”). Other writers include Sidney Gilliat, Wolfgang Wilhelm and Liam Redmond. It’s set during World War II, but it was made afterwards. This probably keeps it a bit more relaxed about its citizens helping German spies. It was released in the U.S. as The Adventuress.

Bridie Quilty (Deborah Kerr) is a headstrong and naive Irish lass just turning 21, in 1944, who grew up hating the British and Cromwell after listening to her drunken father’s pub told imaginative stories of fighting for the IRA against the British during the time frame of 1916 to 1921. With her dad deceased Bridie, against her families wishes, leaves by train her remote West Ireland village of Ballygarry for Dublin and hopes to enlist in the IRA. She’s rebuffed by authentic Irish patriot Michael O’Callaghan (Brefni O’Rorke), who wishes to maintain the peace and follow the law. Instead she’s recruited by master German spy Miller (Raymond Huntley) to help captured German spy Oscar Pryce (David Ward), who holds the location site in France to the D-Day invasion, escape from prison. Bridie gets a pub job in Wynbridge Vale, near the military prison, and by dating and using her sex appeal on the Brit guards provides Miller with vital info of when the Brits are transferring the spy by train to London. Miller escapes with Pryce, but due to an alert intelligence officer (David Tomlinson), the Brits recognize their error of holding the wrong prisoner and gun down Pryce and Miller in a tunnel before they can escape. The wounded Miller, before dying, manages to get to the pub and passes onto Bridie where the spy left his black notebook on the Isle of Man. Her mission is to meet an unknown contact on a train and report where that agent is to find the notebook on the Isle of Man and also to dispose of Miller’s body so the authorities don’t find it. Amusingly, she disposes of the corpse by taking it for a stroll in a wheelchair across the main street of town and dumping in it a ditch just outside of town.

On the day of the breakout, Miller assigned Bridie the job of using her sex appeal to distract for the afternoon the young British officer Lt. David Bayne (Trevor Howard), mistakenly thinking he was the intelligence officer. David can’t figure out why she ran away from him and when she suddenly checks out of the hotel after the prison break, the smitten officer follows her on the train. When the contact on the train is arrested, Bridie goes alone to the Isle of Man and obtains the notebook. She then has a change of heart when she realizes how many soldiers would die unnecessarily because of her foul deed and burns the book. She tells David this, and the two must now escape from both a pursuing team of German agents and the police. In the end, Bridie further compromises her beliefs by falling madly in love with the British officer.

It’s a bravo showing of the Brit’s self-deprecating sense of humor and it also raises a pint of beer to toast the spunky Irish patriot’s good sense to realize what’s right in the end. 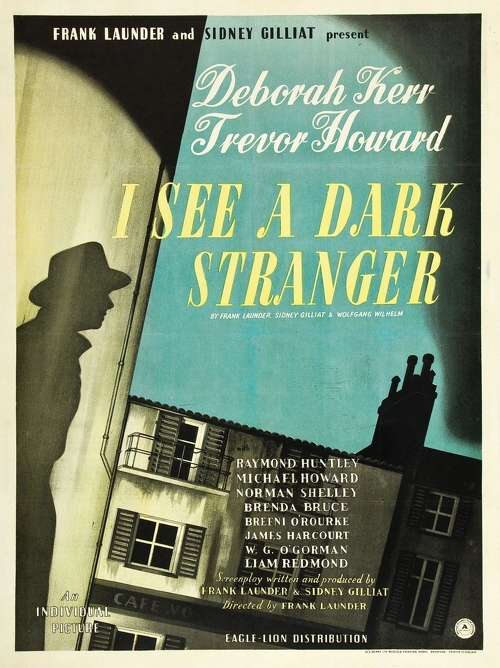