MESSAGE, THE (aka: AL-RIS-ALAH) (aka: Mohammad, Messenger of God)

A religious epic that Hollywood tries to do for Islam what it did for Christianity. It’s one of the few Hollywood pics on Islam, and because of its sincerity and straight-forward approach serves as a valid history lesson on the often misunderstood religion. The handsome production follows the conventions of the Christian epics by stressing how a persecuted few persevered and eventually after much suffering won over the pagan population with massive conversions. It was shot over a seven year period, as it traces the origins of the Islamic faith that began in 610 A.D. through the prophet Mohammed. The prophet remains unseen and unheard according to Islamic law, and when someone addresses the prophet they stare into the camera. That narrative device makes for a lot of awkward moments. The lectures on religious belief are dull, but colorful desert locations and some action-packed battle scenes make things more animated and watchable.

Moslem Syrian-born Hollywood producer-director Moustapha Akkad (“Lion of the Desert”)aims to get things accurate and the screenplay has been approved by Arab scholars though cleric advisers didn’t approve and walked off the set. Thereby the Moroccan government gave the film the boot, but to the rescue came Libyan dictator Muammar Qaddafi and the film resumed shooting on location in Libya under his sponsorship.This controversy was poison for the box office, where the film never had a fair chance to succeed due to protests over both its accuracy (by extremists) and sponsorship by the Libyan tyrant.

The Message begins with the prosperous merchants of Mecca happy with their 300 idols, that allows them to do a thriving business with many tribes who pass through. The arrogant and greedy merchants are led by Abu Sofyan (Michael Ansara) and his wife Hind (Irene Papas). Meanwhile the 40-year-old illiterate Mohammed, a man of many wives and children, meditates in a cave at a mountain and proclaims he was visited by a vision of Gabriel, who said he was the chosen messenger of God and is to speak out against the corrupt pagan worshipers of Mecca. The message is “There is no God but God, and Mohammed is the messenger of God.” The worship of only one invisible God and that all men are equal and women are the equal of men doesn’t sit well with the ruling merchants, which leads Mohammed’s followers to seek refuge in exile in Medina. Eventually Mohammed receives another message to return to Mecca and with the help of his tribal warrior uncle, Hamza (Anthony Quinn), Mohammed and his loyal followers liberate Mecca in the name of God.

The reverential pic is an overlong de Mille-like slog without all the vulgarity, but saddled with crude execution and a predictable formulaic storyline. But if you’re non-Muslim and looking for an accessible film on that religion, this one does the trick without scaring you away–it’s all about tolerance, peace and brotherhood.

The Message was shot in two versions, one in English and one in Arabic. Different actors were required for the Arabic version. 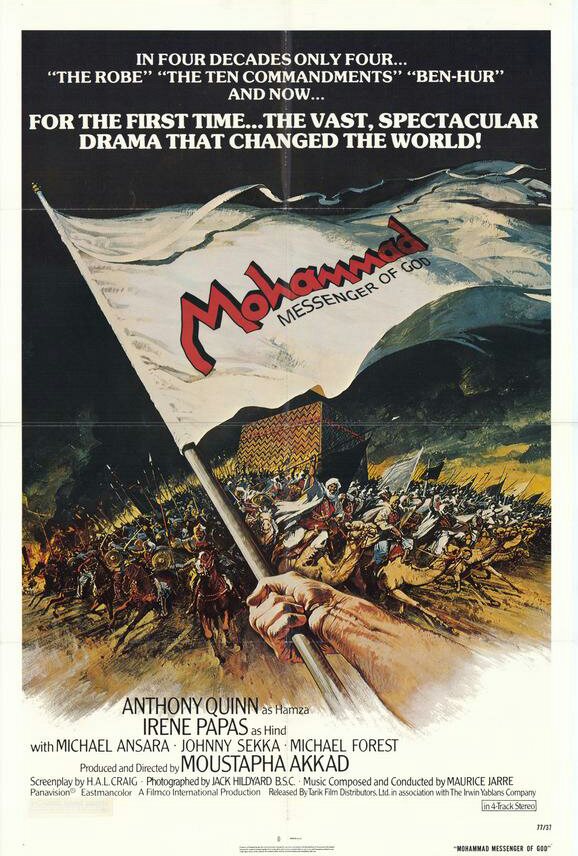