“Pales beside the original.“

Jon Favreau (“Elf”/”Made”/”Iron Man”) directs this sequel, which pales beside the original–a film that both the critics and the public loved. Writer Justin Theroux doesn’t give it much interesting action but provides many unsatisfying subplots, and hands in a talky and less than worthy screenplay that’s only entertaining in starts and fits–one that doesn’t kick in until the fiery CGI-filled climax at the giant Stark Expo in New York’s Flushing Meadows.Robert Downey Jr. is still a gas as the charming, comical, irresponsible, tipsy, genius, narcissistic Tony Stark, the billionaire rogue defense contractor turned metallic super-herowith daddy issues, who is slowly dying from the poison in his mechanical heart. Tony invented the Iron Man armor suit–the ultimate weapon for modern times–but refuses to hand it over to the Pentagon, even when squeezed by the powerful showboating super-patriotic Senator Stern (Garry Shandling). Tony is afraid that his weapon if in the wrong hands will not be used right, and feels it’s best if the world leaves keeping the peace to him–a believer that the private sector works better than the government. Tony feels no urgency to turn his weapon over to the government since the world is at peace because of his leadership role due to his powerful Iron Man suit and because his intel tells him Russia and other foes are many years away from copying his weapon.

The plot thickens when the wacko genius, Ivan Vanko, a.k.a. Whiplash (Mickey Rourke), enters the scene. He’s a Russian killing machine covered with tattoos from head to foot, who blames Tony’s father for stealing his invention from his father and vows revenge. First by trying to kill Tony, as he gets into his Whiplash outfit with two springloaded electromagnetic whips extending from his arms and confronts race car driver Tony when he’s competing at the Monaco Grand Prix. When that fails and Ivan’s imprisoned, Tony’s slimy unscrupulous rival contractor, Justin Hammer (Sam Rockwell), engineers his prison break and gets him to work on building a better Iron Man so he can get Tony’s government contract and become the ‘big man in the world.’ Instead Ivan builds an entire droid army to crush both Tony’s Iron Man and the secret War Machine army under the charge of Tony’s military friend Lt. Col. James “Rhodey” Rhodes (Don Cheadle).

Also part of the subplot is Natalie Rushman, a.k.a. Black Widow (Scarlett Johansson), who is a sexy double-agent working for both Tony and for the eye-patch wearing Nick Fury (Samuel L. Jackson), the head of S.H.I.E.L.D., which makes it difficult for Tony and Pepper Potts (Gwyneth Paltrow), his Girl Friday who he promoted to be the newly appointed CEO, to figure out who to trust.

The film never reaches the same emotional levels as the original and never quite got around to be anything special, just another disposable blockbuster action pic that kills time for those who yearn for lightweight escapist films like homesick Russians yearn for parrots. 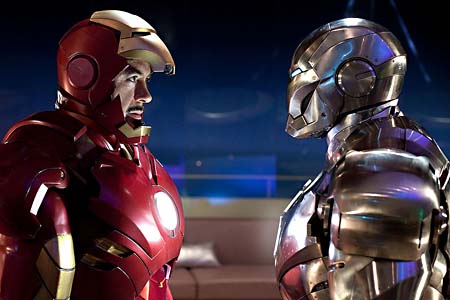