“Whatever pops up on screen seems to work, making this a keeper comic book film.”

Let the summer blockbuster movies begin with Marvel Comic’s superhero film Iron Man! A good beginning, indeed. Iron Man is a surprisingly literate comic book story sci-fi thriller, from a Marvel Comic that first appeared in the March 1963 issue entitled Tales of Suspense and is not as well known as the ones previously adapted to film. It’s dished out with high-concept acting, dazzling CGI special effects and a kickass plot that is serviceable enough so it won’t make you feel insulted by its fuzzy topical storyline. Screenwriters Mark Fergus, Hawk Ostby, Art Marcum and Matt Holloway deserve to take a bow for putting in so much witty dialogue and giving us a tight story that seems fresh. There are certainly no lack of superheroes onscreen, but this one has the gumption to give us a superhero, without super powers, wracked with a moral dilemma, who relies on his smarts to build a weapon that gives him superpower and then transports himself to the war zone in Afghanistan where he can do his heroics against the bad guy Taliban types in his rocket-powered armored Iron Man invention and really make a difference in a war gone south. If anything, the only way we might be able to come out of our bungled War on Terror is with the help of a superhero and a change of conscience, and this film taps into that hope that there will emerge a superhero to save the day and runs with that premise in what looks to be the beginnings of a quality money-making franchise. Actor-turned-director Jon Favreau (“Elf”/”Zathura: A Space Adventure”) helms a fun film that might not be great but is nevertheless very entertaining and has a more solid story to tell than most other blockbuster thrillers.

Tony Stark (Robert Downey, Jr.) is a pompous, self-centered, apolitical, genius whiz-kid inventor and owner of an industrial conglomerate that includes manufacturing arms and doing medical research that he inherited from his late father (Stark reminds one of a somewhat altered version of Howard Hughes) and under his direction, when he took over the company when he was 21 and graduated from MIT, his Stark Industries has supplied the military with the most sophisticated weapons and has become the world’s greatest arms manufacturer–with Stark responsible for killing more people than any other American. Billionaire Stark is a cocky motor-mouthed, reckless boozing playboy and a media-savvy celebrity who patriotically believes his munitions are making the world safe for America. This is a position he has a chance to rethink when on a visit to Afghanistan to demonstrate his latest in Freedom Line missiles, he’s captured in his Humvee by insurgents in an ambush (ironically receiving shrapnel wounds from his own company’s weapons that got in the hands of the bad guys) and is threatened with death unless he builds his captor the latest smart bomb missile. Stuck in a mountain cave for three months with another captive, a foreign surgeon (Shaun Toub), Stark crosses the insurgents up by building from scratch an Iron Man outfit that allows him to shoot his way out and then fly off into the desert to be rescued by the American Air Force. His fellow captive keeps him alive by attaching an electromagnet device to his chest so the shrapnel is deflected from the heart.

Back home in his ultra-modern Malibu mansion, the now vulnerable spoiled middle-aged rich man Stark has a change of heart about manufacturing weapons after seeing all the destruction it does and will turn the business away from WMD and into manufacturing more humanitarian things such as a miniaturized arc reactor for his heart. While Stark secretly spends his time in his plush Malibu basement/lab trying to build a better robotic Iron Man, his bald-headed business partner and surrogate father Obadiah Stane (Jeff Bridges) shows his evil nature by getting annoyed at Stark’s decision, which causes the stock to nosedive, and is exposed by Stark’s loyal super-competent assistant Pepper Potts (Gwyneth Paltrow) as being dangerously untrustworthy. Eventually the secretive Stark will be forced to reveal to his good friend, the military liaison man Air Force Colonel James “Rhodey” Rhodes (Terrence Howard), and to Pepper, his plans to build a new and better Iron Man in a sexy red color so it can be used only as a force for good (which I guess was the same reason for building WMD). When Obadiah also finds out, it leads to a riveting robotic ‘clash of the titans’ street-fight on the California freeway between the forces of good and evil.

Robert Downey Jr. is the unlikely dissolute superhero character that ends up being a perfect choice to play the sarcastic smartypants creator of the Iron Man. His brilliant gift of gab and ability to give his flawed character some soul, gives the film its juice and license to invest his character with an interesting complexity and emotional strength. The always reliable Jeff Bridges plays the villain with the shaved head in a three-dimensional menacing, funny and human way, as someone who deserves to be associated with Halliburton. While Gwyneth Paltrow is sweet, poised and fetching as the leggy assistant who keeps it in check that she thinks her boss is hot. Whatever pops up on screen seems to work, making this a keeper comic book film. 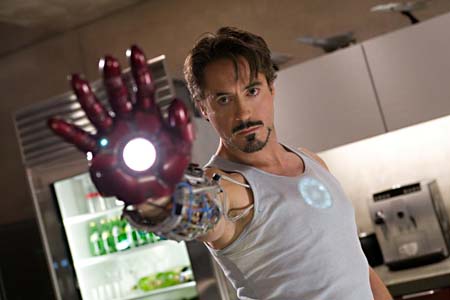 COURT-MARTIAL OF BILLY MITCHELL, THE