A convincingly done documentary-style drama, based on the true story of Igor Gouzenko (Dana Andrews). He’s a decoder clerk from the Soviet Union who is stationed in Ottawa, Canada, in 1943, and defects after WW11 with secrets about the communist spy operation carried out by the Soviet Embassy agents. The film seems like a museum piece, about a time that existed long ago but strangely enough, probably, still exists. It is an anti-communist story without going overboard over what could be termed the “Red Menace,” instead focusing in on Igor and his wife Anna (Gene Tierney) and the love they have for each other and their baby son. We see how this very simple Russian peasant Army man, who is interested only in following his party’s leaders, changes his mind about communism and seeks asylum in Canada, choosing freedom over everything else.

What the film does very well is capture the mood of those cold war years and how Russia, an ally of the West, fooled certain people into thinking they offered a better system of government. In every communist office, there was the ominous picture of Josef Stalin to be seen on the wall, not the friendly picture of George Washington that an American government office might have.

Igor’s life in Ottawa is boring and routine except he is amazed at the large flat he is able to secure and how happy the Canadian people seem to be, despite the war. His work is clouded in secrecy, as he totally accepts the rigors his superiors put him under. They watch his every move, search him after work, order him to be polite to his neighbors but not to make friends with them, and he must play Shostakovich music constantly so as to drown out conversations in the room.

Igor comes to Canada accompanied by his superiors, a rigid Colonel Trigorin (Tozere), a true believer in the Soviet way of life and Major Kulin (Eduard Franz), a true cynic, who risks imprisonment to speak his mind about how little he thinks of the communist regime. He does this when he feels brave enough after drinking. The head man in the spy operation is Ranov (Schnabel), the chief of the Soviet secret police, the type who wouldn’t give his mother a break if he caught her doing something wrong. Ranov is dogmatic and identifies himself wholly with the communist cause.

For most of the film Igor keeps his mouth shut, follows orders, and conforms. Therefore he is well-thought of by the party. He is aware that the Soviet Embassy is being used for espionage, stealing secrets about the A-bomb, stealing secret messages about what the Canadian government is doing, and building a network of Canadian spies who ideologically believe in communism and will try to help the Soviet Union in any way that they can. Their most valuable informer is Dr. Norman (Joy), who is a lab scientist for the Atomic Energy Project.

The most frightening person, of all the heavies we see trotted out to depict the morbidness of communism, is a Mr. Grubb (Berry Kroeger), a Canadian who is masterminding the entire spy network and who is so important in the chain-of-command that he takes his orders only from Moscow. His best recruit is a member of Parliament, Leonard Laetz (Hugo), who is used for Soviet propaganda.

It is only when Igor is ordered back to Russia, that he realizes that he doesn’t want to leave a free country for a despotic one. He defects at great risk to himself and his family. At first no one wants to listen to his information about a communist spy ring in Canada, as he goes to the Ministry of Justice and the newspapers. He is faced with certain assassination by his former countrymen unless the Canadian government comes to his aid. But when he gives the police the documents he smuggled out of his workplace, he is welcomed as a hero by the Canadians.

The film ends as a narrator lists the jail sentences issued to all the spies Igor gave the Canadians documented proof on, giving in detail the number of years each has to serve in prison. But it also closed on the bitter-sweet note that Igor’s family was fortunately granted Canadian citizenship, but will still have to live the rest of their life under police protection.

The story is told in a dry, matter-of-fact style, with the B&W photography adding a gritty feel to the secretive work environment and the snow-capped streets of Ottawa adding to the chilling effect of the movie. This picture had the look of delivering an important message, but it didn’t have more to say than what any reasonable person could already assume about the Soviet Union. 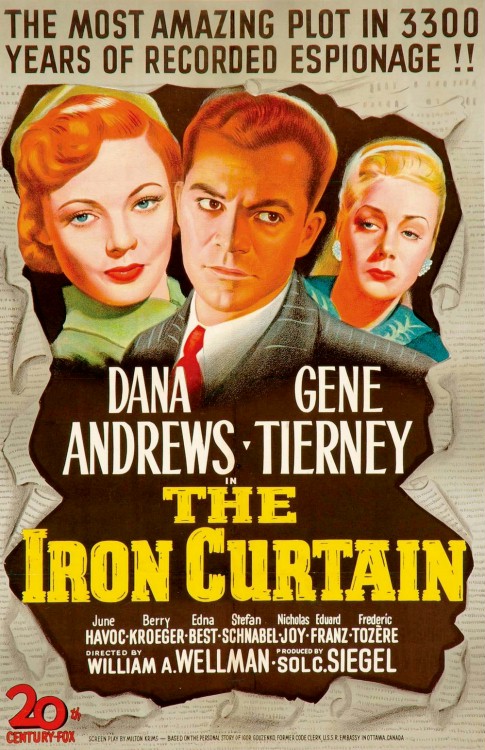