“A labored, trite and tiresome lighthearted comedy that references The Invisible Man.”

A labored, trite and tiresome lighthearted comedy that references The Invisible Man (1933) and all other Universal invisible film remakes. It operates on a low-budget as a B-film. Director A. Edward Sutherland (“Murders in the Zoo”/”International House”/”Dixie”) based it on the story by Kurt Siodmak and Joe May. Writers Robert Lees, Fred Rinaldo and Gertrude Purcell pump up the slight story line with unfunny gags. The pic might have been a little better if it’s burned out star, deteriorating from bad health and soon to die, John Barrymore, didn’t give such an uninteresting and hammy performance.

Mad scientist, Professor Gibbs (John Barrymore), sponsored for years by high living wealthy playboy Dick Russell (John Howard), invents a machine to turn humans invisible. He takes an ad in the paper for volunteers and disgruntled model, Kitty Carroll (Virginia Bruce), incensed at her nasty boss (Charles Lane) for forcing her to quit rather than take his insults, answers it. Meanwhile thugs (Edward Brophy & Shemp Howard) try to steal the machine so that their boss Blackie (Oskar Homolka) could come home undetected after hiding out in Mexico.

After Kitty’s playful romp being invisible to teach her abusive boss a lesson, she returns to see Gibbs in his lab. He takes the invisible woman to the lodge of his sponsor, where Dick and Kitty fall for each other despite her being drunk and him unable to know what she looks like. While they’re out the crooks steal the machine from the lab and take it to Mexico. But they can’t operate it without the secret formula. So they return to kidnap Kitty and the professor. How the crooks are stopped, ends up as lamely presented as your average inane Abbott and Costello vehicle.

The mediocre special effects were by John F. Fulton. Scene-stealers Charles Ruggles and Margaret Hamilton play long-suffering servants for their bosses John Howard and John Barrymore, desperately trying to put some fun into this dud. The problem being the fun was invisible. 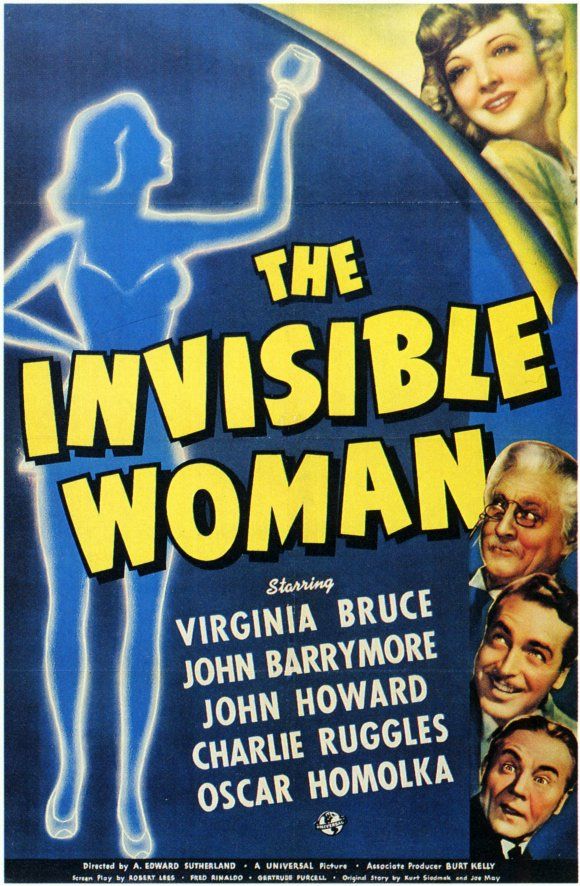