“A disquieting investigative essential documentary that sheds light on the massive problem of rape and the systemic cover-ups in the US military.”

A disquieting investigative essential documentary that sheds light on the massive problem of rape and the systemic cover-ups in the US military. The Defense Department reports that 22,800 violent sex crimes were committed in the military last year alone, and many others were not reported because the military makes it difficult for the victim to get justice. Astonishingly twenty percent of all active-duty female soldiers are sexually assaulted. The powerful film lets the many idealistic victims tell in their own words their story, and how for them the attempt to get justice might have been just as agonizing as the rape. All the interviews are emotionally charged and someone would have a stone heart not to be moved by how the military has betrayed these vulnerable servicewomen. The problem of rape in the military and the poor follow-up of claims for medical help through the bureaucratic VA is not exactly a secret, but as reported here, it is shocking and damning of the military command. Talking head interviews include speaking to victim enabler Mary Kay Hertog, head of the defense department’s Sexual Assault and Prevention and Response Office, who incredibly praises her inept predecessor, Kaye Whitley, even though while in office she continued the military’s habit of blaming the victim and protecting or even rewarding the offender.

The Invisible War takes us from the 1991 Tailhook Association meeting incident of the Navy to the sex scandal at the Air Force Academy in 2003.

Muckraker filmmaker Kirby Dick (“Twist of Faith”/”This Film is Not Yet Rated”/”Sick: The Life and Death of Bob Flanagan, Supermasochist“), co-directs with Amy Ziering, this unpleasant but necessary film. Inspired by Helen Benedict‘s 2007 Salon article on women in Iraq, which surprised the author to discover no one was adapting the procedures put in place because of the publicity from the widely covered sex scandals by the academies. The filmmakers ask what needs to be done further to change the military’s disgraceful macho culture that prosecute rape by blaming the vic. As a result of the film, which speaks to its power, the Pentagon has applied new rules for reporting assaults and new prosecution procedures that supposedly will improve things for the victims.

The film was the Audience Award winner for best documentary at Sundance in 2012. 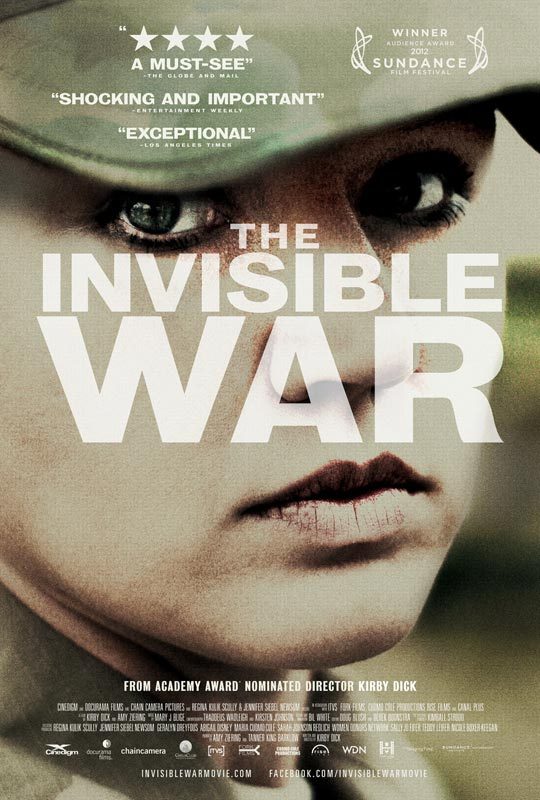