“One of the all time fun pictures…”

One of the all time fun pictures, with enough ingredients in it to please a wide variety of film fans. James Whale, the director of Frankenstein (31), says this one is his favorite film. This was English actor Claude Rains’ American movie debut and vehicle to future stardom, even though he is visible for probably less than 30 seconds and that comes only at the film’s climax. He only got the role because Boris Karloff turned it down, afraid that the role wouldn’t work for him because he wouldn’t be seen: but Rains’ distinctive voice was all that was needed to bring credibility to the part he will always be remembered for. A film so perfectly and magically done, based on the H.G. Wells novel, remaining faithful to the book while adding its own flavor of camp; such as, a wonderfully bizarre Una O’Connor screaming her head off upon seeing the invisible man in “The Lion’s Head” inn. She’s the wife of the inn’s owner.

A special film such as this one brings unmitigated joy to those of the 20th century who like to sit in the dark and watch motion pictures, an activity that could have hardly been envisioned a couple of thousand years ago; and, is looked upon, even today, with a strange reserve by those who don’t take their movies that seriously, not understanding just how rewarding it is for those who find certain films so important — that it becomes an integral part of their life. For such film buffs, they can see the same film over and over again getting the same great satisfaction. As for me, I could have seen this film as many as twenty times already, starting when I was 12-years-old and first saw it on a TV program on WOR called “The Million Dollar Movie.” I still get a kick out of it and see something delightfully new in it with each viewing. It is especially fun to watch it with youngsters who have never seen it before and are generally unfamiliar with watching a movie in b/w; it is interesting to just watch the reaction you get from these youngsters, as they are usually surprised at the fun they are having in watching such a creaky story. It is a film like this one that can lure you into becoming a bona fide film buff.

In the snow a mysterious stranger (Rains) enters the village inn and seeks a room. He is dressed so you can’t see one feature of him, as he is wrapped in facial bandages and wearing a hat and an overcoat, rubber gloves and sun goggles. The patrons at the bar think he is an escaped convict. The owner of the inn (Forrester) is upset that he hasn’t paid his bill and is rude to his wife (Una O’Connor), who wants her husband to get rid of the strange guest. He has turned his room into a science lab and is scaring away the other customers. The stranger, who is the scientist Jack Griffin, just wants to be left alone. He ran to this nearby village when he realized the experiment that he was working on for the last 5 years went wrong and he had become invisible after using a drug called monocaine, which is derived from a flower grown in India that has the effect of a bleach but, also, has powerful side effects when ingested; such as, megalomania and permanent invisibility. It was his hope that he could buy some time by staying undisturbed in this village inn to find a formula for becoming visible again.

The gifted director James Whale knew what to do with this story, as his serious sounding but humorous caveat throughout the film is: There are certain things on earth man must not meddle in.

When the police are called in to remove the inn’s guest who wouldn’t budge, there is a mixture of suspense and tongue-in-cheek humor in the air as Griffin unwraps his bandages and to the utter amazement of the policeman and the other bar patrons becomes invisible, running around the room undetected while tweaking and mocking them. This is one of the all time great scenes in film history. He goes through the village, playing childish pranks, stealing hats off the men and riding a bike invisibly through the streets. It is only the police chief who is cynical, refusing to believe what the people are reporting.

Griffin feels he needs a visible partner to help with this maddening plan to rule the world by initiating a reign of terror. So he visits his scientific colleague, Dr. Kemp (Harrigan), who is his hated rival and a man of low character. He has wanted to steal Griffin’s wife, Flora (Gloria), away from him upon learning of his disappearance a week ago. Her father (Travers) is the scientist that both of them work under. But Dr. Kemp is now scared and the scene is filled with pathos, melodrama, and ironical wit. Griffin dresses in his unwilling guest’s robe and pajamas and usual bandage disguise; and, he explains to him that his invisibility is not perfect: after eating his food it could be seen for an hour afterwards until it is fully digested, in the cold air you could see his breath, in the rain he would look like a bubble, and that he has trouble walking down stairs as an invisible man because he hasn’t quite gotten used to the fact that he is invisible and therefore is very cautious of the downward steps he takes. But he tells Kemp not to fret, these are minor problems that will be worked out in due time; and, besides, on a clear day conditions are perfect for him.

The invisible man makes Kemp come with him back to the Lion’s Head, where he left his invaluable notes. Once there he comes across a meeting being held to determine if the invisible man isn’t a hoax as the police chief insists. This angers the invisible man, so he slays the chief and is now the subject of an intensive manhunt.

But how do you capture an invisible man? Whale has a ball with this police problem.

When the invisible man discovers police all around Kemp’s house, he realizes Kemp tried to double-cross him and promises to kill Kemp at exactly 10 p.m. tomorrow. This bizarre threat adds to the mystique of the invisible man as the police believe they have set a perfect trap for their man, using Kemp as bait.

The film comes to its splendid climax in the snow with John Fulton’s ultra-modern, for its day, special-effects. It added enormous visual support to the sci-fi story by having the invisible man’s footprints remarkably appear in the snow. 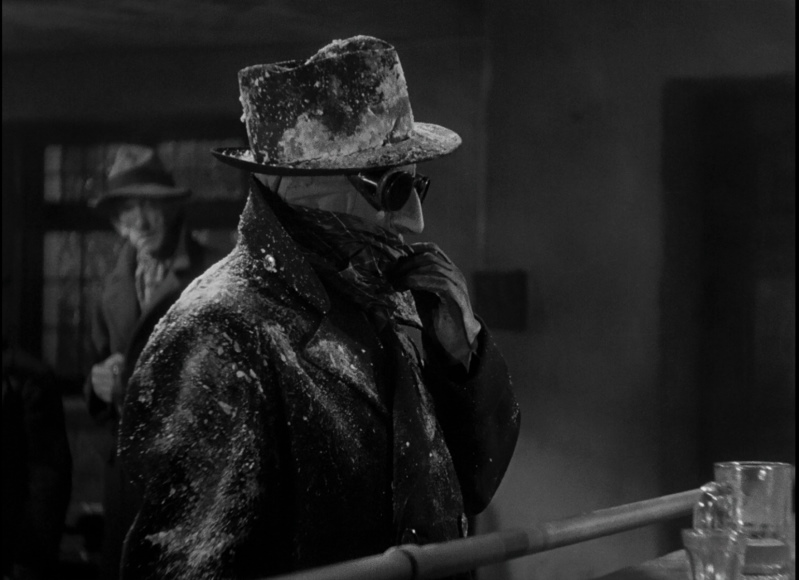