“It’s one of those films where it’s best to go with its maddening elegiac but elusive flow and let whatever comes to you be enough.”

Claire Denis’s (“Beau Travail”) latest is a weird groundbreaking otherworldly film that breaks down borders in a post-colonial realpolitik (merging the northern and southern hemispheres) and cinematic way (similar to Jean-Luc Godard’s blend of non-linear narrative into a dreamlike tale to try and reinvent cinema). It demands a lot from the viewer but supplies little help other than the opening statement that best summarizes the story “Your worst enemies are hiding inside, in the shadows, in your heart.” Both the narrative and characters remain frustratingly vague. I had no idea after viewing it twice what was going down for sure: if the main character murdered an immigrant man or not, if he had one or two sons or for that matter who did what to whom. It seems to mix reality with imagination and it’s up to the viewer to sort things out for himself. The beauty is in the majestic images, the lush photography, the intriguingly lyrical setup and the possibility there’s weight in this elusive dramatization. It’s inspired by French philosopher Jean-Luc Nancy’s memoir of his own heart transplant. The ‘intruder’ was the cancer from which he suffered in the aftermath of his transplant.

It follows the travails of 68-year-old self-sufficient Frenchman loner Louis Trebor (Michel Subor), who lives on the snowy plains of the Franco-Swiss border in a log cabin with his two beautiful huskies. Louis definitely has at least one son, Sidney (Grégoire Colin), whose border guard wife Antoinette (Florence Loiret-Caille) was seen in the opening scene performing a customs check of a vehicle with the assistance of a contraband-sniffing dog. They have two young children, but the son has a strained relationship with his puzzling father (he thinks dad is crazy). The little else we know about Louis is that the pharmacist (Bambou), who provides his heart medication, is also his casual sex partner and he has an eye out for his whip-cracking ‘Queen of the Northern Hemisphere’ dog breeder neighbor (Beatrice Dalle)–but she wants little to do with him. In this fragmented narrative, where the chronology of events are not in order and much of the action is happening in Louis’s head as if it were an abstract daydream, we soon learn that he hired a mysterious Russian black marketer (Katia Golubeva) to get him a heart and later on she gets into his head as his voice of conscience and the angel of death. We are led to believe the operation might have taken place in Pusan, South Korea, where he buys a big boat to go to Tahiti.

By the time we get to Tahiti where Louis is searching for his other son, the one he never knew, to give him money and give him his big boat, we come to look upon the adventure as the guilt-trip of a haunted dying man with a shady past saying adios to life and trying to find a way out with some dignity and to see if he can live long enough to reinvent his life.

In this elliptical and most challenging Conrad-like ‘heart of darkness’ film, Agnès Godard’s photography is stunning, Nelly Quettier’s editing is handsomely done and Britain’s Tindersticks gives off with a mesmerizing seductively sinister score composed by Stuart Staples of a repeated loop of percussion, guitar and trumpet. The only thing not to like about the film was that I got the feeling the more you tried to figure it out the less satisfying you will find it. It’s one of those films where it’s best to go with its maddening elegiac but elusive flow and let whatever comes to you be enough. The heart is used here as a metaphor for what we accept or reject in life, and Denis in her inscrutable way seems to be asking us what do we really mean when we talk about things of the heart. 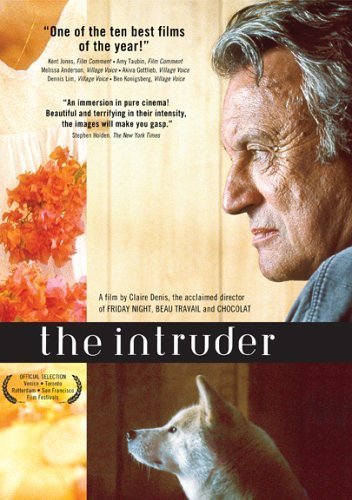