“It’s the kind of pic where the honest undersea treasure hunters are forced to work for a drug dealer.”

In John Stockwell’s (“Blue Crush”) brain-dead youth orientated thriller, there’s one character telling another”Easy cheesy.” It’s the kind of pic where the honest undersea treasure hunter are forced to work for a drug dealer. The heroes all have great bods, the gals look hot in their skimpy bikinis, the guys look like hunks in their swim suits, and everyone seemingly has not too much working upstairs, which should indicate we’re in for another lightweight surfer flick from Stockwell that is easy on the eyes and sensitive to these athletic looking youth. But not so fast, this aquatic tale turns ugly and is filled with blood and gore. Only the fantastic underwater photography by Peter Zuccarini remains pretty to look at and gives the film its proper splash. Matt Johnson’s murky script has the characters dive into deep waters, but the unconvincing dark narrative always remains in shallow water.

Jared Cole (Paul Walker) is an independent-minded 29-year-old who barely survives trying to eke out a living salvaging wreckage from ships in the Caribbean off the coast of the Bahamas. His pretty girlfriend Samantha “Sam” Nicholson (Jessica Alba) works at an aquatic amusement center and lives with Jared in his battered trailer. The happy-go-lucky couple thrive on their poverty, their love for each other and dream the impossible, of finding a valuable treasure undersea.

Jared’s old friend Bryce Dunn (Scott Caan), a sleazy criminal defense lawyer, and his striking lanky blonde girlfriend, someone he met in a bar a few hours ago, Amanda (Ashley Scott), have come to the Bahamas for a vacation and the two couples hook up. They all go out diving on a boat that Bryce possesses somehow from his law activities and stumble upon a wrecked plane that has a cargo of valuable cocaine. Bryce and Amanda greedily want to salvage it and sell it on the street, but the goody-goodies Jared and Sam veto that idea. But the motor-mouth Bryce and the unreliable Amanda team up with local drug dealer Primo (Tyson Beckford, international male model) and try to fence the drugs. The only thing is that he works for a dangerous drug kingpin Reyes (James Frain), who tells the fab four if they don’t bring him his drugs in 12 hours he will kill them. In the meantime the fab four have discovered a real sunken treasure, a pirate ship called the Zephyr that sunk in 1861. The biggest salvage operator in the Bahamas is the ruthless Derek Bates (John Brolin), who aims to make sure that whatever Jared salvages he will take it away from him.

It all leads to double-crosses, underwater sea fights, a damsel-in-distress situation and enough silly adventure stuff to make an action-serial out of it. It was so confusedly staged, that none of it came through as real. The film’s funniest line, though unintentional, had Alba yell “Shut up, you coke whore!” to Scott. As one could surmise, the acting was uniformly weak. Though the dialogue was so soggy, you can hardly blame these thespsians completely for that. But if you look past the absurd storyline and all the other serious flaws and just take in the exotic underwater shots and revel in those bronzed bods of Paul Walker, Jessica Alba, Scott Caan and Ashley Scott, then you should find this film, at least, watchable. 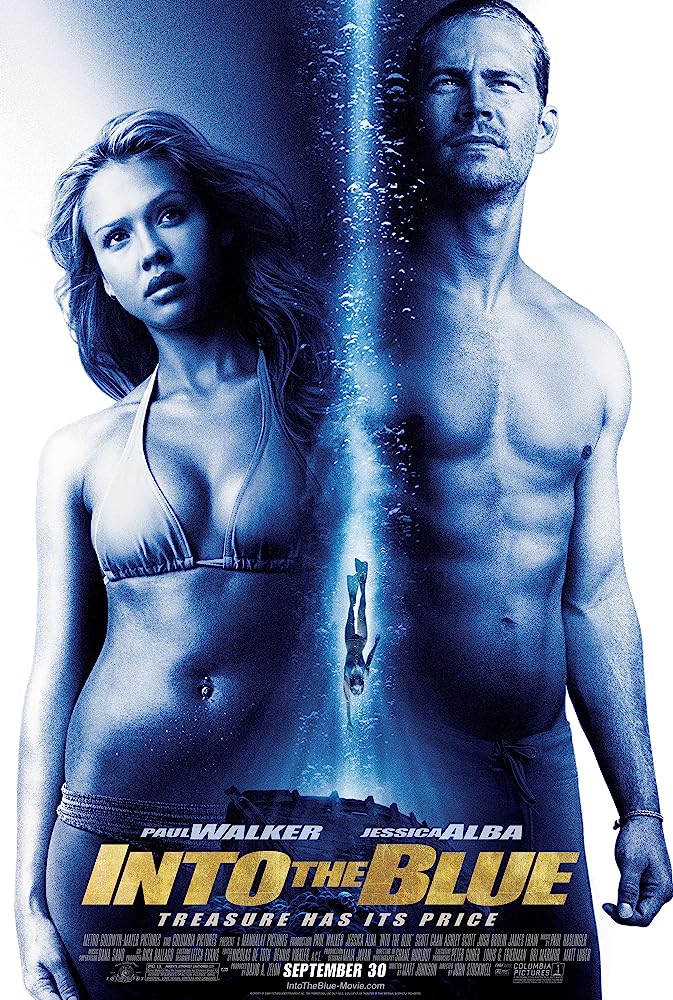