“Martina Kudlacek’s engrossing film study does a service to the film world by reminding everyone that there are filmmakers who make films as art.”

Czech documentary director Martina Kudlacek makes for Austrian television the bio about American pioneer avante-garde filmmaker Maya Deren with much love and affection. She has caught the spirit of her flamboyant subject and what makes her such an essential filmmaker. Maya was a rich part of experimental film history and the art of making a truly independent film, and this film gives us an understanding of who she was and how absorbed she was in her groundbreaking work. The film is so fascinating because Maya is an excellent subject and many of her aging friends are still alive to lend a voice. Also, the caretaker of experimental films and noted longtime underground director Jonas Mekas, who runs the Anthology Film Archives in the East Village of NYC, shows clips found from unseen films from Maya’s collection stored there in coffee tins and fondly tells us details about her film-making skills. What is most remarkable is that Maya’s film output, due to financial reasons, was limited to only six short films, all made in 16mm. But those six were enough to make her a legendary figure, someone whose spirit will always be remembered by those who love poetical films made from the heart.

Maya’s nonlinear and anti-Hollywood films are the real deal and do without the fakery Hollywood has built its reputation on. This is in sharp contrast to how most indie films are viewed nowadays, as they have become for the most part merely low-budget vehicles for wannabe Hollywood filmmakers. Martina Kudlacek’s engrossing film study does a service to the film world by reminding everyone that there are filmmakers who make ‘films as art,’ as many have been influenced by Maya’s courage and groundbreaking techniques. This introduction into that art world is a good place to begin for the uninitiated and for film buffs inspired by works that are lyrical and original. If nothing else is gained, it at least provides a look-see at how an artist functions and the travails the artist faces by an indifferent society.

Maya Deren was born Eleanora Derenkovskaya in Kiev in 1917, the year of the Russian Revolution, and died of a cerebral hemorrhage at the too young age of 44. In 1922 her upscale and highly educated Jewish family, her father was a psychiatrist and her mother a prominent artist, left Russia for America and settled in upstate New York. She went to prep school in Switzerland and received degrees at N.Y.U. and Smith, and had visions of being a dancer.

The diminutive, curly haired, vivacious, intellectually gifted, hotly passionate and bohemian free-spirit Maya who loved to dress in embroidered blouses and long peasant skirts became a dancer for Katherine Dunham’s company and others. On tour with the Dunham company in the early 1940s, she met the Czech émigré artist Alexander ‘Sasha’ Hammid and they fell in love. Influenced by her study of mythology she changed her name to that of Buddha’s mother–Maya. Maya means illusion, that is in the sense of a woman looking past the illusions to find her inner reality. This name fitted very well the woman who thought of herself as a creature of the sea and someone in constant flux. In 1942 she married her second husband Sasha and found that her love for film-making was overwhelming, as she refused to dedicate herself to the rigors that dance called for and instead became an experimental filmmaker. Together with Sasha, living on Morton Street in New York’s Greenwich Village, they made on a secondhand Bolex camera in 1943 the much revered ”Meshes of the Afternoon,” a nonlinear groundbreaking 16mm film that influenced generations of filmmakers, especially women. It’s about a young woman (played energetically by Deren) who uses a key to open all the doors to her world, as the key is used as a symbol to free herself as an artist and a means to contemplate about the geography of time. In all her films, Maya was possessed by a musical rhythm and always used dance to highlight what she meant by natural motion. In 1945 she shot a short film in 16mm using the dancer Tally Beatty. It was called “A Study in Choreography for Camera,” and in 1946 went on a lecture tour explaining what she meant by motion in a motion picture and how her films used silence to give it a dreamlike logic and gracefulness. She had become well-known to intellectuals in the arts (such as the anthropologist Gregory Bateson) and they backed her request for a Guggenheim grant, whereas in 1947 she became the first filmmaker to receive that fellowship and used the money to go to Haiti to study voodoo. She never made her documentary on Haitian voodoo as she ran into financial problems, but Maya did write one of the classic books on that topic called the “Divine Horsemen: The Living Gods of Haiti” (1953). It was edited by Joseph Campbell and is considered one of the best books ever written on that forbidden topic, as it is especially startling that the Haitians opened up so much to a white American woman. During this period she divorced Sasha, who later married her close friend Hella Hegman.

In 1952 Maya met a Japanese musician and composer, Teiji Ito, who was 18 years her junior and married him in 1960. He became her third husband, and in their uncompromising lifestyle they lived in poverty. Maya’s sudden death was either because she was taking shots containing speed administered by Dr. Max Jacobson, known as Doctor Feelgood, as she thought they were only vitamin shots; or, as some friends think, from anger over failure of her last film to be recognized. Maya’s husband thinks she might have vented too much over a court decision that ruled against him receiving a family inheritance. Evidently, they needed the money badly because she couldn’t afford to shop for food and was undernourished. Most of her friends believe the not eating played a part in her sudden illness, and discount any belief that it was a voodoo curse that did her in as rumored.

Some of Maya’s other films are discussed by friends involved in the actual projects and they talk freely about how much her films meant to them and to the film world. “At Land” (1944) brings three women together near the sea and they emerge into mythological Greek figures, while “Ritual in Transfigured Time” (1946) is a dance piece exploring the harmony of nature as some of the blacks dancing with whites is an attempt to show the universe as being color-blind. Underground filmmaker and close friend Stan Brakhage talks about his favorite Maya film “Meditation on Violence” (1948), which he calls a personal film and statement on finding one’s love essence. It stars Chao-Li Chi as a martial arts untrained dancer moving into balletic movements to capture the Eastern concept of formlessness, which is the highest point of perfection in existence according to Buddhist thought. Maya’s last film was “The Very Eye of Night” (1952), with choreography by the noted Antony Tudor who brought with him his Metropolitan Opera Ballet School as performers. It was about walking dreamers as dancing stars, which was meant to be a child’s vision of time. It’s the way people view Hollywood stars, as they get lost in their own thoughts about what makes them shine. The film premiered in Haiti in 1955 and in New York in 1959, but was panned by many uninformed critics who thought she lost her power to make films.

“In the Mirror of Maya Deren” is a well-deserved tribute to an unsung and little known heroine of the film world. Maya was a true pioneer of film-making and an artist who should be cherished for doing her thing to point out that art is not essential for survival, but to live without it negates everything that is human and worthwhile. 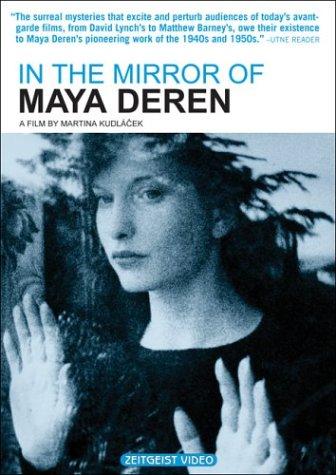