“One of cinema’s best literary adaptations.”

The final film for legendary director John Huston (“The Maltese Falcon”/”Moby Dick”/ “Under the Volcano”), suffering from emphysema during filming (he couldn’t move without a supply of oxygen), nevertheless it results in a masterful and intelligent production that’s perfectly realized and well-crafted, one of cinema’s best literary adaptations. Within months of the film’s release, the 81-year-old Huston died. It’s a most faithful adaptation of the last short story in James Joyce’s 1914 published Dubliners (almost word for word) and is superbly scripted by Huston’s oldest son Tony. Completing the film as a family affair is Huston’s daughter Anjelica Huston, who has a starring role in the ensemble cast made up of great Irish theater actors.

The film is set in Dublin, on the blustery night of January 6, 1904. During the winter season two aging spinsters, Kate Morkan (Helena Carroll) and Julia Morkan (Cathleen Delany), annually invite family and friends over to their town house for a dinner party celebrating the Epiphany feast. Their favorite guests are their nephew, an articulate school teacher, Gabriel Conroy (Donal McCann), and his beautifully poised wife, Gretta (Anjelica Huston). The jolly guests recite poetry, sing and Kate and Julia’s much younger single niece Mary Jane (Ingrid Craigie) plays a classical piano piece. Huston spends a lot of time showing the guests mingling with each other, engaging in conversation and dance, and after the goose meal and pudding the witty Gabriel unabashedly honors the three spinster hosts with a long-winded but warm speech of thanks for their generous Irish hospitality. Freddy Malins (Donal Donnelly) is the aging likable bachelor drunk saddled with a bossy elderly and frail mom (Marie Kean), whom he lives with in Glasgow, and brings comic relief to the party by saying what’s ever on his mind as he’s a bit tipsy even though he promised mom he wouldn’t touch a drop. After all the guests leave, Gretta is brought to tears by the haunting rendition of “The Lass of Aughrim” sung by the opera singer guest Bartell D’Arcy (Frank Patterson). Back in their hotel, after a picture postcard horse carriage taxi ride across the snowy city streets, Gretta confesses to Gabriel that the song has stirred suppressed memories of a short-lived romance from her youth when she was seeing a delicate 17-year-old lad who used to sing that song and who tragically passed away after saying to her in the cold outdoors while convalescing from an illness that “I do not care if I live.” She believes he may well have died on her behalf. This surprising revelation that his wife loved someone else, something he never knew before, makes Gabriel realize for the first time the kind of immense power the dead hold over the living and has a great impact on him, taking him down a few notches from his cocky attitude that he’s superior to the other guests because of his stable relationship and their empty lives. It’s a graceful and moving scene that only a master filmmaker can achieve, where it has McCann in a subtle performance (it seems like he’s hardly acting) convey his new found self-awareness that he knows precious little about his wife while he looks out from the hotel window at the light snow falling and tries to reconcile how he will now get on with his life by saying such things as ”ONE by one we’re all becoming shades,” and ”Better pass boldly into that other world, in the full glory of some passion, than fade and wither dismally with age.” With this being said, I still found the elegiac Joyce story somehow even more potent and the film not a substitute but only a reason to read Joyce–one of the last century’s greatest writers. 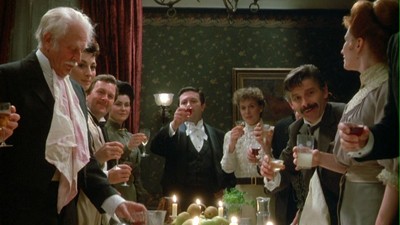 MONA LISA AND THE BLOOD MOON