“I got a headache watching this meaningless downer.”

This dark thriller failed to please as much as it was disturbing in all its mumbo jumbo about destiny. I got a headache watching this meaningless downer. Spanish director Juan Carlos Fresnadillo’s debut feature is an absurdly pretentious thriller about those who have what’s called “the gift,” which means they are lucky and somehow can steal their luck from others for their own purposes.

In a Canary Island desert casino a bizarre game of chance is run by an elderly Jewish Holocaust survivor, Sam Berg (Max von Sydow), with a death wish over his guilt as a survivor. This unhappy dude is obsessed with luck ever since he as a child was the sole survivor of a concentration camp, because his number was not picked to go to the gas chamber. The wealthy players bet against each other in a ridiculous assortment of games, some of which are Russian roulette type of games. Their good luck can be stolen with a touch of the hand or a photograph. Sam’s two rules are that he doesn’t want any of the players to touch him or take his photo. Luck is viewed as something real, that one can put their finger on and use as a product. The only one Sam lets see him (he wears a hood while playing in the casino) is his key employee, this dour dude named Federico (Poncela), an earthquake survivor and grifter, whom Sam mentored for a longtime but kicked him out and took back his gift by giving him a big hug after a falling out. It came about as Federico gets so cocky he thinks he can go out on his own and challenge Sam to be the luckiest guy in the world.

The premise is nonsensical and made more cloudy by a frenetic story that chases after disaster survivors as if they were celebratory gods, as it aims to keep everything unclear in the hopes it can scam the viewer into buying into this hokum. It revolves around Federico seeking revenge on Sam, whom he has this intense love/hate relationship with, as he tries to find a lucky soul to compete against him in one of those Western-like showdown scenes.

When a jumbo passenger airliner crashes and all 237 passengers and crew die, the sole survivor is a wanted bank robber named Tomas (Sbaraglia). Federico declares he has “the gift” and teams with the fugitive to play those extreme games of chance. Federico introduces the naive lucky one into his dark world of sicko players and preps him for a chance to face Sam and make his fortune. Police investigator Sara (Monica Lopez) is added to the suspense, as she’s obsessed with catching Tomas and is willing to play the extreme games in order to get her prey (Don’t ask why!). The red-headed Sara is also a disaster survivor and a possessor of “the gift,” who survived a car crash with some wicked chest scars. Her husband and daughter died in that crash.

Tomas’ first game has him as a winner. He wagers his finger to see if he can win a house and a car. The players are blindfolded and treacle is poured on their heads. The winner is the one the insect lands on. This game reminded me when I was eleven and would go into a candy store with some friends and order egg creams and we would each place a lump of sugar on the table in front of us and then fold our hands under the table. The first fly to land on the sugar cube in front of the individual, meant the others would have to pay for the lucky guy’s soda. What I’m suggesting, is that this premise is geared for an adolescent mentality.

One of the more bloody games involves the players running full-speed, blindfolded and with their hands bound, through a dense wooded forest to see who is “lucky” enough to avoid running into a tree and getting knocked silly. Tomas loses to a bullfighter named Alejandro (Dechent) who never got gored in his career and Ana, the ex-girlfriend of Tomas, is now in the possession of Sam, as he plans to kill her. But even though he’s a loser, Federico arranges for Tomas to play Sam to win Ana back. Even though Tomas doesn’t love her, he gets Fedrico to put himself up as the stake. In the final chapter there’s a gun with five live bullets, and in this extreme game Sam and Tomas will take turns firing one shot at a time at each other before there’s a winner standing alive.

This stylish puzzler is not worth solving. Its thrills don’t emanate from a sensible story. But if it’s only the dazzle in the Pulp Fiction way of filming that catches your fancy, then at least you won’t lose any sleep trying to figure out the deeper meaning of this tale–there is none. On this amusement park ride everyone ends up just where it started, as the film opens and closes at Sam’s joint in Tamagana. 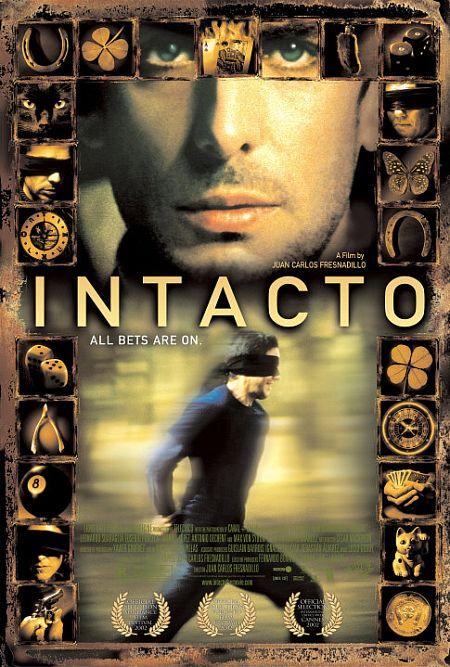