Radio singing cowboy Gene Autry and Smiley Burnette both make their film debuts in star Ken Maynard’s singing western, which was Ken’s first pic for small indie studio Mascot after leaving Universal. Autry and Smiley have cameos as singers at a square dance held at the dude ranch. Less than a year after this pic, the genial singing cowboy Autry would replace a grumpy Maynard in the Mascot serial Phantom Empire and later Autry would start the singing cowboy craze while Maynard found work in films for ten more years but today is mostly a forgotten figure. Director David Howard (“Painted Desert”/”Dude Cowboy”/”The Marshal of Mesa City“)and writers Colbert Clark and James Gruenkeep it B-western friendly.

The gabby Cactus is talked into betting the horse Tarzan to win the race with Chandler, and only loses because Tracy fixed the race through foul play–tripping Tarzan with a wire before the home stretch. After Chandler meets Miller he blackmails him about his prison record, and tries to muscle his way into a partnership with Charlie over his dude ranch and successful gold mine. Chandler is also smitten with Lila and wants Charlie to force her to marry him. But Lila is smitten with Kentucky, and the handsome cowboy is likewise smitten with her.

Meanwhile Tracy is irked that the brutish Chandler is cheating him out of his share of the promised gold and robs the stagecoach carrying Miller’s gold without Chandler’s knowledge. Ken somehow gets framed for murdering the stagecoach driver and then gets framed for Chandler’s murdering of Tracy. But with the help of Cactus, Kentucky finds the proof that Tracy rigged the horse race and committed the robbery with three henchmen and he further learns that Chandler’sreal name is Monte Korber and he’s the son of a dangerous convict Miller spent time with in prison. Unknown to Chandler, Miller told the sheriff about the blackmail attempt and we now learn that Miller received a full pardon for his supposed earlier crime when it became evident he was innocent. With the baddies out of the picture, Kentucky openly courts Lila while the misogynistic Cactus sneers.

The songs include “Down in Old Santa Fe,” “Mama Don’t Like Music,” “That’s What I Like About My Dog,” “Because You Didn’t Get a Girl” and “Wyoming Waltz.”

Director Howard was on loan in a short contract to Mascot, and when time ran out Joseph Kane ended up finishing the lively film for him. 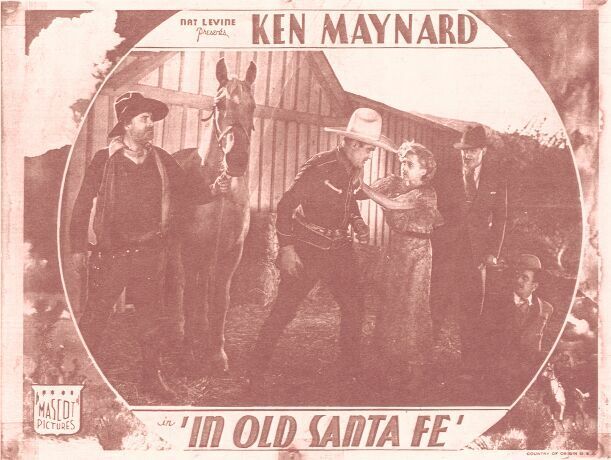