It’s a more lively remake of Joe May’s 1921 silent The Indian Tomb, that’s based on the novel by Thea von Harbou- the former wife of Fritz Lang (“M”/”The Big Heat”/”The Blue Gardenia”). Lang’s exciting, exotic and imaginative epic is an old-fashioned two-part escapist mythic adventure that signaled his return to his native Germany after a longtime exile in America to escape the Nazis and is shot with stunningly beautiful color harmonies on location in the Rajastan region of India. The Indian Tomb picks up where the first disc, The Tiger of Eschnapur, left off in a cliffhanger. It obsessively covers in a simplistic childhood folk-tale parable Lang’s lifetime themes of sexual desire, the illusion of power, and revolt from the power structure. In the end it shows the Eastern belief in a good light, that holds the view that only by overcoming one’s errors, selfhood and letting go of one’s unwholesome desires does one have a chance of experiencing wisdom.

It has a dashing German architect named Harry Berger (Paul Hubschmid) residing in the floating palace of Eschnapur, where he’s been hired by the despotic maharajah Chandra (Walter Reyer) to modernize Eschnapur’s schools and hospitals. Harry gets Chandra’s ire when he steals his future wife, the erotic Indian temple dancer Seetha (Debra Paget), and flees with her across the desert to be chased by the treacherous Prince Ramigani (René Deltgen) and his cavalry. He’s the malcontent older brother of Chandra, who schemes with a rival prince, Padhu (Jochen Brockmann), to overthrow his brother and take the crown. Seetha is captured, thinking the goddess Siva she prayed to had let her down, while Harry is captured out of her sight—leading her to believe he’s dead. The Prince tells his brother that Harry is dead and schemes to get the revengeful Chandra to marry Seetha rather than torture her to death, as that best fits his agenda to usurp the throne by showing how his brother acted against the wishes of the gods and thereby the priests will call for his banishment.

Dr. Walter Rhode (Claus Holm) is Harry’s architect partner and is married to his sister Irene (Sabine Bethmann), and they arrive in Eschnapurjust as Harry fled. They hold out hope that Harry’s still alive, while Chandra orders Walter to build the most beautiful large-sized tomb for Seetha whom he plans to bury alive when she’s captured.

The lavish palace is strikingly beautiful, but in its underground there are a labyrinth of eerie corridors, deep well-like dungeons (in one such dungeon is imprisoned the chained Harry), and a leperarium where the lepers of Eschnapur have been sent like vermin to rot out of sight from the uninfected.

The enormity of the palace is so beyond any of the characters (whether the technically minded Westerner or the spiritual Easterner) that it in one way or the other imprisons all who stay there. A hateful Chandra is tricked by his lying brother into marrying Seetha, a marriage he must go through with since he announced it publicly. But Chandra plans to kill her the next day by placing her in the airtight tomb. Before that happens, Harry escapes and is helped through the vast underground passageways by his brave sister and brother-in-law. In turn, Harry rescues Seetha, Ramigani’s revolt fails and the villain becomes a snack for the crocodiles. In the climax, the disillusioned Chandra yields to what is written by fate and surrenders his throne and then himself to become the servant of an ascetic holy man to learn humility and to become egoless. The now humbled Chandra also allows the foreigner to escape with his dream girl Seetha, but in giving up all these possessions he now at least has a chance to gain enlightenment and escape from his prison-like existence.

It’s hokum and spectacle at its formal best, with engrossing and opulent sets and the enticing not-to-be-missed temple dance by a scantily-clad Paget—one of the highlights from the 1950’s movies. 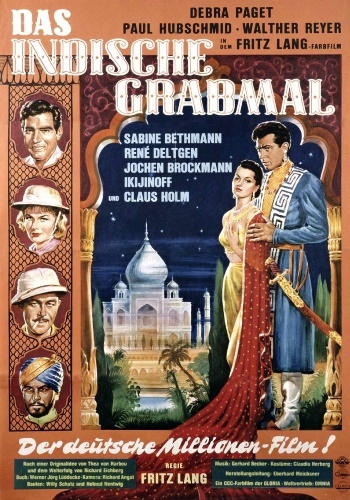