“Though the narrative falters by the third act, the tight pace and gorgeous bluish tinted photography by Dunlop keeps it all watchable.“

Though fictional The Innocent Sleep was inspired by the true story of the death of Roberto Calvi, a shady Italian banker from Milan who was murdered in London in 1982. Director Scott Mitchell crafts a cat-and mouse suspense drama built around the underwritten script by Ray Villis. In this low-budget crime drama, Mitchell in his directing debut takes us on a journey from the bottom rung of humanity, of those who live homeless in a skid row section of London called Cardboard City, to the inside hidden enclaves of the rich and powerful. It’s a classical tale of international conspiracy and murder, but unfortunately the longer the narrative goes on the less credible and more routine it becomes.

In the chilling opening scene Alan (Graves), a homeless man with an alcohol problem who drifted to London from Liverpool and dwells in Cardboard City, witnesses from his perch the execution of an Italian businessman, left hanging under the Tower Bridge by the Thames. He hears the vic speaking Italian before he’s strung up by four other men, one who also speaks Italian while the others have distinct British accents. The killers spot Alan and give chase, but he manages to elude them. Burly Inspector Matheson (Gambin) finds the body, and the next day’s newspaper headlines call it a suicide.

Back in Cardboard City, Alan’s older homeless friend George (Graham Crowden) counsels that he should alert the police. At the local station Alan discovers the detective in charge of the investigation is Matheson, who was one of the men in on the hanging. Alan leaves the station without telling anything but realizes that he’s been identified and the killers will be after him. So after further advice, he goes to Billie Hayman (Annabella Sciorra) an American journalist working in London with good connections. Billie eventually believes him even though he’s a bum and she’s at first distracted by his appearance and won’t listen. When she checks out his story, she uncovers that the murder is complicated and involves some big players in the world of finance, the Vatican and organized crime. Billie has to talk her cynical big-shot editor into letting her follow her instincts and go with the story, a formulaic crime story device that is no better or worse in this pic than in all the other B-movies it was used.

Though the narrative falters by the third act, the tight pace and gorgeous bluish tinted photography by Dunlop keeps it all watchable. 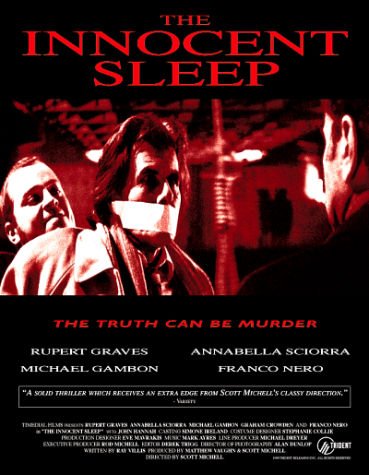