IN MY SKIN (Dans Ma Peau)

“Infused with a keen sense of intelligence.”

Marina de Van (acted in Francois Ozon’s See the Sea and cowrote his Under the Sand and 8 Women) makes her smashing feature directorial debut ”In My Skin.” She also wrote the screenplay and is the star. “In My Skin” is a frightening psychodrama portrait of a thirtysomething Parisian businesswomen who becomes destroyed by her obsession of cutting her own flesh. It does not lead to any illumination–spiritual or intellectual–but it is grossly shocking to watch her mentally come apart as she perversely falls in love with her body by carrying out acts of self-cannibalism. Though the film is inventive and its attack on conventions and selling out to the system are all there, it is hard not to think that maybe this is more a case of a mental breakdown being featured than any radical exploration of modern yuppie society angst. The film never fully explores what drives Esther (Marina de Van) to want to carve herself up, though it strongly suggests that she is suffocating by making wrong life choices and can’t seem to get out of the stifling trap she has built for herself. She has become numb to life, and finds that she can’t help being just another robotic figure in the unfeeling corporate structure.

Esther is an upwardly mobile and intense woman who works for the last two years as a research analyst for a pressure cooker public relations firm. Things seem to be going well for the gap-toothed woman, who is attractive in a mousy way without being pretty. She has a responsible but boring boyfriend named Vincent (Laurent Lucas), who has been offered a bigger job as the new P.R. designer man for a bank. Vincent is anxious that they start living together instead of separately, and has moved plans forward for them to buy a house. At work, she has pleased her fussy boss Daniel (de Montalembert) by writing good reports and is up for a promotion to project manager. She attends a networking bar party with her best friend Sandrine (Léa Drucker), someone she’s known from college who has worked for the same firm for the last five years and helped her secure the job.

At the party, without the presence of her boyfriend Vincent, Esther ventures outside for a walk in the backyard, where she falls in a hole and gets a severe gash in her leg from a piece of scrap metal. Though bleeding profusely and receiving an ugly scar she doesn’t feel the pain and returns to the party, and it’s not until a few hours later after discovering blood dripping on the floor that she gets the wound treated at the hospital–where the doctor informs her that she will need in the future a skin graft.

The incident sets off a weird sadomasochistic pull on Esther, as she won’t let the wound heal and begins to compulsively carve herself up. Esther goes into the storeroom during work and adds more knife wounds to the damaged leg. But the office workforce is too self-absorbed to notice one of their own coming apart–while the boss only cares that she gets her work done and meets those deadlines.

Esther’s friendship turns sour with Sandrine, who becomes jealous over her promotion. The stressful business dinner with her boss and two clients over red meat and red wine proves to be a disaster, where she can’t participate in their sterile idle chatter about the cultural life of European cities and gets more of a charge by carving up her arm with the steak knife under the table than with her present company. She also drunkenly fantasizes that her arm is detached from her body and is lying on the table.

As Esther becomes more obsessed with her wound over time, she only pretends to communicate with her loving boyfriend or with her girlfriend or anyone at work. No one knows how to deal with her, as her unhappy death-like existence has hit a wall and she only feels alive slicing up her flesh and watching her blood pour out.

It makes for an unpleasant watch, but uncompromisingly brings home the metaphorical point of how destructive it is not finding your own inner bliss and living a life that is a lie– where your worth is dependent on what others think of you and where conformity rules the day and silence is not golden. Though infused with a keen sense of intelligence and an affecting sense of disgust at seeing a life frittering away without purpose or feeling or love, I’m not sure if it doesn’t toy too much with a shocking bloodfest scenario and probably never gets past its existential leanings to show in more telling terms how a middle-class ordinary woman can just suddenly go bonkers without cause.

Marina de Van’s splendidly forceful deadpan performance, where it’s hard to take our eyes off her, takes us into the festering open wound this pic opened up, as her primal performance never covers up what she exposes. She proves that sometimes things become so overwhelming in life that one needs to get professional help, but if I read this film correctly–the filmmaker is also saying the time to get help is when you choose to do things in life that go against your inner grain and not when your decision making process can no longer function. De Van’s film is similar in scope to the powerful and unconventional Roman Polanski’s Repulsion, David Cronenberg’s Crash and Claire Denis’ Trouble Every Day films that also attacked the dementia attached to isolation and dissociation.

Dominique Collandant’s special-effects makeup is gross, and should be marveled at for its reality if you have the stomach for such grotesque sights. 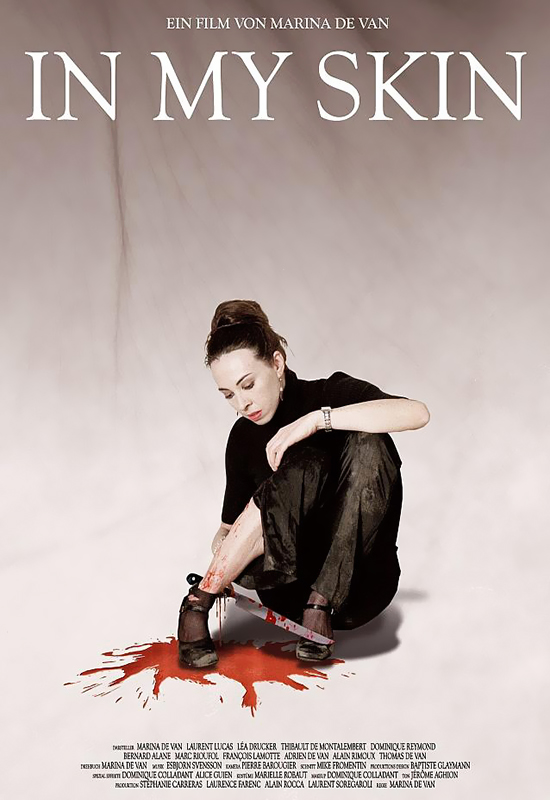