“It is a dark morality tale.”

Stefan Ruzowitzky’s film is an ominous parable set in the 1930s in an Austrian village. The story centers on the mysterious death of a mean and stingy landowner and his unusual last will. His land will be given to the peasants to share and their peasant status will be elevated to farmers (land owner). The farmer does this because he hates everyone, including the church which expected to inherit the farm; and, since he has no family he mischievously leaves it to the peasants who worked for him. He expects that they hate each other so much and can’t work together, that they will kill each other off.

It soon turns out that there is no mystery about who brutally killed the farmer Hillinger, it is a peasant woman. She was a virgin raped by Hillinger a number of years ago and when she went to the police, they don’t believe her. The farmer frames her by putting a stolen brooch in her trunk and had her arrested for theft. She became pregnant from that rape and gave birth to an idiot child called Lukas (Schwarz). He was raised on the farm as a peasant and was blessed with a happy-go-lucky disposition, but not knowing who his parents were or where he came from. He tried to be friendly with everyone. The only one who knew the secret was the old peasant woman, Alte Nane (Julia), who never told anyone else.

The hated foreman (Tilo) who used to beat the peasants regularly and treat them with undue cruelty refuses to go along with the seven others who plan to work the farm and own something for once in their life. An offer by a rich farmer, Danniger (Wildgruber), to buy the place well below its worth, is refused. The battle then becomes a class struggle between the church, which sides with the landed citizens, and the town farmers, against these new one-seventh farmers.

When the new farmers do better than expected and bring in a good harvest the established farmers led by the particularly vindictive Danger, who is afraid of them succeeding and what it would mean to all the other peasants in the territory, gets the city fathers to charge the farm a high inheritance tax; when that fails, as the peasants make the payment, they resort to beating up the stableboy, killing a cow, harassing them while working, and eventually to the most fatal incident in the story — burning down some of the farm buildings and forcing Lukas to fight back to defend himself. That event leads Lukas to kill the foreman and go on the run.

The film highlights the interactions of the likable but weakminded Lukas and the vibrant Emmy (Sophie Rois) to tell its sad tale. Lukas loves Emmy, romancing her freely, but things change when they have all the responsibilities of running the farm and she is forced to become the leader for the group, displaying a flashing temper at all the injustice done to them. At first the new farmers were confused about what to do but soon became determined to succeed, to put aside their differences and work together.

It is a dark morality tale about the powerful ones acting petty and cruel, while the peasants act with dignity and courage. Ruzowitzky’s film throws out many political ideas, gives one a true sense of what collective hatred and what class warfare are like. The film has many different moods to it: ranging from dark comedy to free-spirited romance to bitter violence. It tells how a nonviolent person could suddenly become a hunted man for murder. This is a well-made film, whose aims are clearly shown. 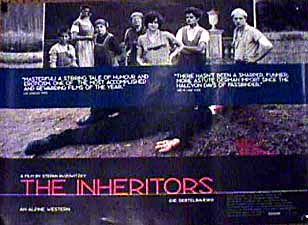