Paul Weitz (“About a Boy”-co-directed with his brother Chris) is director (first solo effort) and writer of this wannabe poignant comedy drama that raises its hand in favor of the nuclear family over the globalization business family. It deserves some kudos for taking aim at the corporate world and the human toil suffered over its bottom-line business practices. The problem becomes after it presents its not-too-pretty picture of corporate reality, it had no idea what it further wanted to say and flubbed an opportunity to weigh in with more heft on a contemporary problem Hollywood has all but ignored so far. Instead of following through on the serious human issues raised it gets sidetracked with an insignificant and uninteresting romance story, where it attempts to draw cheap laughs at the expense of an overbearing father worried about his teenage undergraduate daughter living alone in Manhattan (comedy often done in Hollywood and with far better results). It also wastes a great performance by Dennis Quaid, perfectly cast as the competent longtime older ad department head of a sports magazine who gets lowered in rank due to a corporate takeover and has to work under a callow man half his age. The result is a lightweight comedy that has some good moments but far more bad ones, before it peters out and becomes as insignificant as a last year’s dot.com failure.

The 51-year-old Dan Foreman (Dennis Quaid) is the likable, loyal, old-fashioned, manly, and happily married man with the ideal family who in the multinational conglomerate takeover of his sport magazine, Sports America, is replaced as advertising head by a 26-year-old shark, Carter Duryea (Topher Grace), who made his rep hustling cell phones to the kiddie market and impressed his young superior shark boss on the feeding chain, Mark Steckle (Clark Gregg), who is kissing up to the Big Kahuna, a Rupert Murdoch type of tycoon named Teddy K (Malcolm McDowell). The inexperienced-in-advertising Carter’s mission is to increase ad revenues and downsize the big salaries, which has the entire place jittery about whose to get the ax. Though an anal-retentive jerk, the baby-faced yuppie boss holds power over so many lives and seems to show little concern after-firing three longtime employees. Carter annoyingly parrots Teddy K’s propaganda talk about synergy, interlocking companies as a source of strength, and that the business is like family, and feels proud when told by the smarmy Mark that he’s being groomed to move up the corporate ladder. But Carter finds his personal life damaged when his recent bride (Selma Blair) walks out on him despite his big promotion and he only has his goldfish to keep him company. He rides a new top-of-the-line Porsche as a reward for being a turd, but yearns for companionship. The lonely and insecure corporate star on the rise worms his way into Dan’s family life and meets his attractive daughter Alex (Scarlett Johansson). She’s passed off as a fine tennis player who has decided she wants to major in Creative Writing at NYU. Dad’s salary is nice, but the education is so expensive that he has to take out a second mortgage on his suburban home to pay the college bills. Also, his fortyish wife Ann (Marg Helgenberger) discovers she’s surprisingly pregnant. But what gets dad’s goat more than anything else, even his professional humiliation, is that he soon discovers Carter is secretly sleeping with his daughter. What she sees in Carter is hard to guess, unless he’s another father-figure, or this is her way of rebelling or, maybe, she’s not as smart as we are led to believe.

It all leads to Dan finding out his new boss can’t cut it because he’s still immature and needs to lean on Dan as a father-figure as much as Alex still does. Through some superficial contrivances (which are hardly believable) the male figures learn to bond and the ruthless business world does its nasty survival-of-the-fittest corporate thing again, giving the upstarts their first and certainly not their last big shocks in life. For the moment, Dan has back his big office with a view and can resume doing business in his old-school selling way. The film seemed to be traveling fast to get back to where it started. After seeing so many glib characters and what really goes on behind glass doors in the corporate world and how easily order was restored for the good guys, I felt, at last, as if I might have been watching a pretentious allegory that is really a feel-good sitcom that knows how to tidy things up in a nice safe way before the last reel. 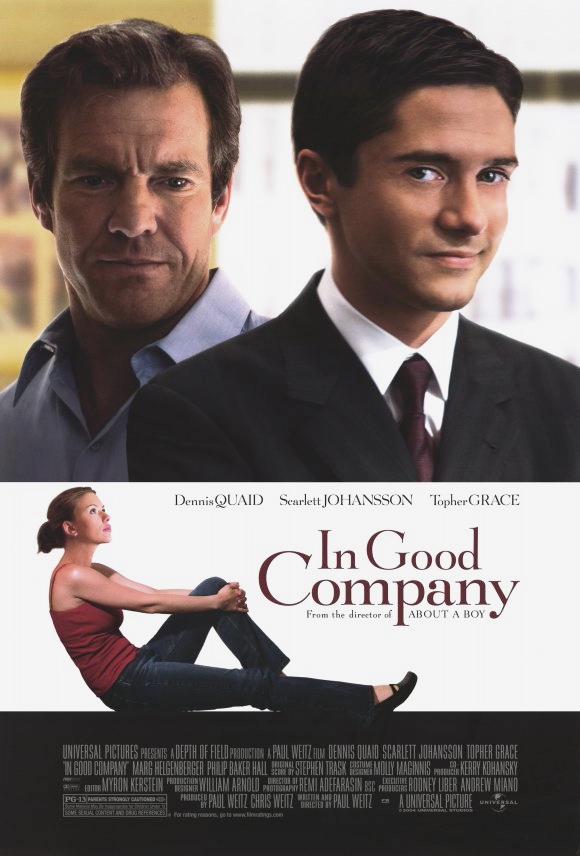