Steven Soderbergh (“Kafka”/”Sex, Lies, and Videotape”/”The Limey”) effectively helms this lighthearted but at the same time serious satire on corporate crime, something that leaves the filmmaker too cynical about big business to just go for the joke without taking some deserving swipes at the global corporate environment. The bizarre true story is based on the dense nonfiction book “The Informant: A True Story” by Kurt Eichenwald (who covered the story for The New York Times), that has no exclamation point in the title like the film (with the film using its added punctuation mark as an excuse for the bubbly Marvin Hamlisch score and all the giggles and shock over the corporate misdeeds, as it turns the suspenseful corporate criminal story into a comedy). It’s cleverly written by Scott Z. Burns (The Bourne Ultimatum), and tells of a brilliant but likable wacko compulsive liar who becomes a corporate whistle-blower. The part is grandly played by Matt Damon, who sports a mustache, a hairpiece, nerd glasses and adds some more weight around the belly. It’s a loony version of “Erin Brockovich,” but much more fun.

We never know what the chatty Mark Whitacre (Matt Damon) is thinking even though he provides a voiceover telling us exactly what he’s thinking (a brilliant filmmaking decision), as the rising star executive at agri-industry giant Archer Daniels Midland (A.D.M) supposedly follows his wife’s advice to tell the truth and tells the earnest F.B.I. agents Shephard (Scott Bakula) and Herndon (Joel McHale) about the company’s multi-national price-fixing conspiracy. He then further risks his career by carrying around a tape recorder and being wired as an informant in 1992 and does so for over two years. The smug, energetic, hotshot company vice president and biochemist, living the good life in his luxurious suburban home in Decatur, Illinois, is happily married to Ginger (Melanie Lynskey) and has four children, with two being adopted, and a large collection of expensive European sports cars. The delusional Mark, absurdly thinks he’s the guy wearing the white hat going after those in black hats and boasts that he’s Agent 0014 “because I’m twice as smart as James Bond.”

In due time, the protective agents sour on their star cooperating witness, who collects over a hundred tapes that gets the goods on the big boys who run the company–the CEO, Tom Papa (Mick Andreas); the second in command, Terry Wilson (Rick Overton); and the security chief, Mark Cheviron (Tom Wilson)–but who is caught in a number of lies including his own corporate malfeasance involving some 9 1/2 million dollars in kickbacks.

There’s a healthy anger in Soderbergh’s comedy, an anger that A.D.M. and their ambitious unethical executives were symptoms of the seemingly all-encompassing capitalist disease of greed and corruption that corroded the country with multiple scandals in recent times until the bubble burst and plunged America into an economic downturn that is currently so widespread and, so far, not fixable that it has the potential to bring down the country. 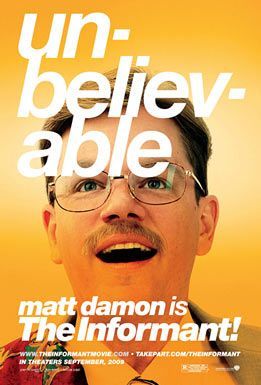