“An entertaining work of trash.”

An entertaining work of trash, that’s hokey, poorly written, stiffly acted and presented in a lumbering manner. The low-budget, far-fetched, mad scientist/sci-fi/crime drama/horror B-film, features a sickly looking Lon Chaney Jr., whose career is on a downturn, desperately taking parts in cheap films after being a long-time star for Universal in top films. It’s directed by Jack Pollexfen(“Dragon’s Gold”) and written by Sue Bradford and Vy Russell. The public domain pic became a drive-in favorite and was often shown on public TV.

Convicted killer and armored car robber Butcher Benson (Lon Chaney Jr.) is executed at San Quentin, just after he tells his last visitor, the shady lawyer Paul Lowe (Ross Elliott), the boss of the armored car robbery, he intends to kill him for not trying hard enough to get him off the death penalty and fellow robbers Joe Marcellia (Kenneth Terrell) and Squeamy Ellis (Marvin Ellis) for escaping prison by being witnesses for the state against him at his trial. During the visit Lowe fails to get the doomed man to reveal where he stashed the $600,000 stolen loot, and scoffs at his seemingly empty threats.

Before buried, a crooked morgue worker sells the Butcher’s corpse to Prof. Bradshaw (Robert Shayne), a rogue San Francisco experimental biochemist, who hopes to use the corpse to experiment for a cancer cure. Instead the powerful jolts from the electric shocks bring the corpse back to life, frying his vocal chords but leaving him super-strong and able to stop bullets from penetrating. The Butcher quickly dispatches of Bradshaw and his assistant and steals the car of a stranded motorist and also murders the carny owner motorist, as he goes to LA to visit his stripper girlfriend Eva Martin (Marian Carr). The Butcher sent her a map, to be opened after his death, where he hid the stolen loot in the LA sewers. When the Butcher arrives in LA, after running through road-blocks and killing a number of cops, he visits Eva’s dressing room and discovers Lowe has stolen the map.

Meanwhile the supposed straight-arrow Lt. Dick Chasen (Casey Adams), the lead investigator for the armored robbery, a case that’s closed with the Butcher’s execution by his boss Capt. J. L. Lauder, has romantically befriended Eva while working the case on his own time and she calls to tell him that as strange as it may seem, the Butcher has returned from the dead and is after his three former cohorts.

The pic lacks imagination, and its conclusion is unconvincingly pat. Nevertheless it has something about it that is indestructible and should be pleasing enough for both fans of Chaney and of the genre. 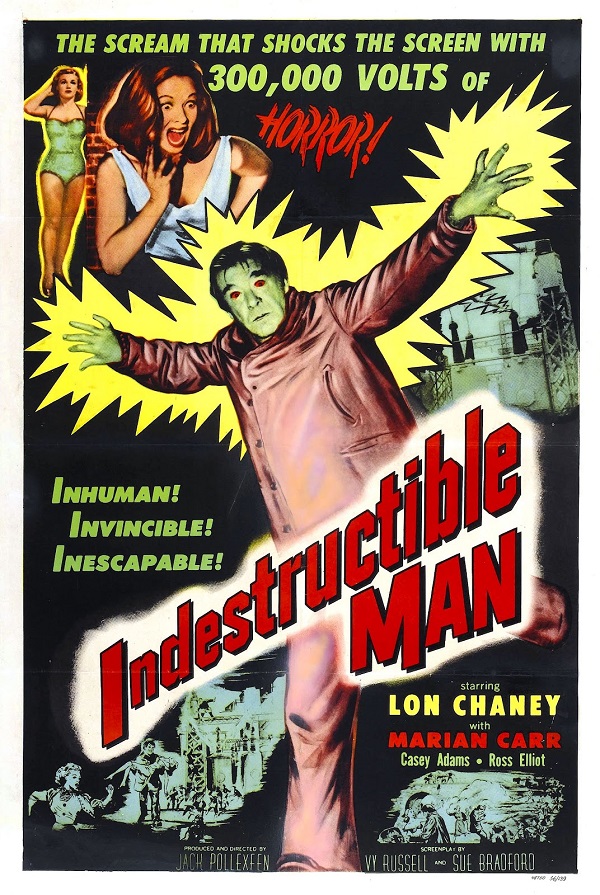