“I guess to really enjoy this film you would have to speak the language of Urdu to understand its poetical nuances, otherwise the poetry as presented didn’t seem like much.”

A slow developing tale about a university professor in a small northern India town who is hassled when trying to get an interview with someone he idolizes, India’s greatest living Urdu poet (it’s a fictional characterization). I guess to really enjoy this film you would have to speak the language of Urdu to understand its poetical nuances, otherwise the poetry as presented didn’t seem like much. As well-acted and crafted a film as this directorial debut was for Ismail Merchant, it still failed to make the story interesting for a wider audience as the poetry fell on deaf Western ears even though its heart seemed to be in the right place. The film still seemed to be too dry to care about an unfamiliar Muslim language and an intellectual culture no longer in vogue, dying a slow death. As worthwhile a project as it is, as adapted from Anita Desai’s 1987 novel in which she also does the screenplay, it still is hard to bring an intact literary work and make it viable as a cinematic experience without changing it. The film’s main failure is that it never comes to life as a moving poetical work, but always seems like an academic exercise.

Deven (Om Puri) complains about the unruly college students he teaches Hindi and snaps at his overburdened and frustrated wife Sarla (Neena Gupta), who is fed up with being an unappreciated housewife. They live in Mirpir with their precocious young son Manu (Tinnu Anand), where the family is mainly concerned about money problems and with the father too distant from the family. Deven, in an attempt to keep Urdu alive, contributes articles to a small literary magazine in his spare time. The magazine’s editor Murad (Tinnu Anand) visits him from the nearby bigger city of Bhopal and asks him to interview the once famous Urdu poet Nur (Shashi Kapoor) who is living in retirement in Bhopal. The amateur poet in Urdu is more than pleased to do so, though he does not feel secure that he is up to the task. Deven meets the great man in his home, and is disappointed. Firstly, the poet has two wives who are competing for his attention by constantly quibbling with each other. The older first wife (Sushma Seth) is a harpy, who has charge of the downstairs in the large house and is reduced to doing the cooking for the family. The much younger second wife (Shabana Azmi) who bore him his only son and has a nasty disposition–was working in a local brothel when he met her, now she aspires to be a poetess. He is an obese man in failing health, also suffering from alcoholism, sloth, and having a rabble group of admirers who shamelessly leech off him. The elderly poet hangs around with these idlers everyday, which is making his ulcers even worse.

The first meeting between the admired poet and the lowly university teacher goes poorly, as the poet gets drunk with his group of admirers and vomits in his second wife’s bedroom. She treats the guest with contempt, thinking he is just another one of the poet’s foolish admirers and makes him clean up the mess as if he were a servant.

Somehow, Deven gets invited back to the house and plans with the first wife how to get the reluctant Nur to give him this interview for posterity. The problem is that she wants money to arrange for the poetry reading and for the private room he would need to get him away from the second wife, who will not allow for the interview. But Deven’s magazine refuses to give him the money and he has to go begging the college officials for it. He finally manages to squeeze a little money out of the college registrar, saying that he will make a tape-recording of the poet the college can keep as a valuable resource for its classes.

As things continue to go wrong for the serious-minded but naive Deven he finds that no one really cares about the poet, his poetry, and the Urdu language; and, he is stuck as the only one who can do something to save the language and restore its usage in intellectual circles. The flawed poet is viewed as a symbol for the entire Urdu tradition.

Deven gets a chance to hear sexy wife number 2 sing Nur’s poems, as all the admirers sit around and get their rocks off as she stirs them up with sexual intonations and lyrics that go something like this: “O candle, for the sake of the moth do this little favor … Flare up once and then die.” It must have been a cultural thing, because it went by me. Her performance seemed as if it was as gaudy as an Esther Williams bathing suit number in a Hollywood pulp film.

Once the poet is audio taped in the private room after Deven has put his job on the line by taking off three days to make the tape, the trouble begins as he had to buy a secondhand tape-recorder that is not reliable; and, since he is not handy as part of the deal he gets the proprietor’s moronic relative to work the machine. But he is more harmful than helpful. The poet himself is only interested in getting Deven to supply his admirers with rum and Biryani, and gives Deven very little on tape that is useful. These scenes were played as lowbrow comedy, showing the clumsiness of Deven in handling the tapes and the awkward situation he was in.

The film ends with a heavy-handed symbolic message, which summarizes the struggle to preserve the old traditions and clearly shows the director’s obvious love for Urdu and his contempt for those who are hypocrites. An old rundown but beautiful mansion in Bhopal owned by Deven’s departmental chairman is being knocked down to make way for a shopping center as the chairman, an enthusiast for Urdu, is only happy about the money he is receiving for the property and could care less about the historical value of his mansion.

The acting performances by Shashi Kapoor and Om Puri deserve special praise. But I’m afraid the film was too stilted and unmoving. It failed to capture the beauty of the ancient poetical language for those who are not emotional about preserving a dead language they never heard before. 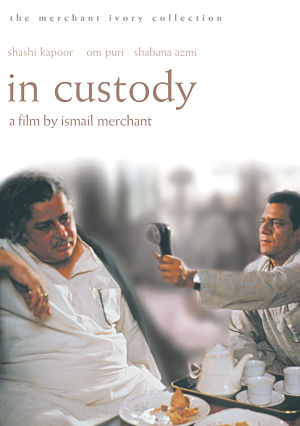