“Reaches only monumental levels of dumbness and lame comical moments.”

Tedious mockumentary in the style of The Blair Witch Project. It’s shot as a hoax film (a pretend at filming a documentary about a movie Werner Herzog supposedly is making about the Loch Ness monster) that reaches only monumental levels of dumbness and lame comical moments. It spends half the film wanting you to believe the events are real and then fades into the mode of preposterous story telling as it settles down in Scotland showcasing its fakery of a Loch Ness monster hunt expedition. Somehow hack Hollywood screenwriter Zak Penn, who wrote such scripts as “X2,” “Behind Enemy Lines,” and “Suspect Zero,” convinced noted German indie filmmaker Werner Herzog (“Fitzcarraldo”/”Aguirre: The Wrath of God”), of some 40 to 50 films, to participate in a documentary on the myth of the Loch Ness monster and its role in the collective unconsciousness that’s really directed by Penn and cowritten with Herzog, with most of it being written on the cuff. At one point Herzog, who is both self-effacing and serious, exclaims that the Loch Ness monster is a figment of our imagination and hints that he’s just trolling to see what makes people believe in such absurd things. He then says the public has a need to believe in something, which helped him in his former offbeat adventurous documentaries. Herzog then goes on to say that most of the alien abductions occur in America and among overweight women. It’s Herzog’s contention that documentaries in order to move into poetical territory must use “fabrication” to reveal a deeper truth (which he calls the “ecstatic truth”), and that cinema verite documentaries can never get at the real truth because they only reveal the filmmaker’s or bookkeeper’s truth. So in essence, this is a faux documentary when not shooting for sly comedy is serious about presenting a parody of making a documentary, showing Hollywood studio-movie interference, and showbiz power trips.

The whole point of the film is built around many in-jokes and supposedly clever conceits that pay homage to Herzog as a filmmaker with a rep for taking chances in making risky films and also has the ability to poke fun at himself for being so eccentric. It picks up at a pre-production dinner party for the film’s crew at Herzog’s Los Angeles house and we first meet the producer of Herzog’s movie “The Enigma of Loch Ness,” Zak Penn, while there’s a documentary film being shot about Herzog by another filmmaker named John Bailey (this film’s cinematographer). Also at the gathering is noted cinematographer Gabriel Beristain, who will be the cinematographer on the ‘film within a film.’

At Loch Ness, Zak hires the unfriendly local David A. Davidson to captain their expedition ship around the lake, an obsessed crypto-zoologist Michael Karnow to voice his belief that the monster exists, gaffer Russell Williams II from Hollywood and, unknown to Herzog, Penn hired Playboy model Kitana Baker to be a sonar expert and appear in a revealing patriotic colored bikini. This upsets Herzog, as he believes her presence in such a cheesy outfit makes the film dishonest and contemplates quitting but stays on because he doesn’t want to ruin the picture for the crew. It all leads to disharmony among the crew and an incoherent compromised ending that not only wasn’t funny but doesn’t work because there are no surprises left once we know this is a fake documentary. It pretends to give us a Herzogian moment we don’t expect–of the mild-mannered man actually getting pissed off. I suspect this one might interest Herzog fans far more than the casual viewer, who might at best only find something to take away from it as a curio or be pleased with Herzog as an actor–something he’s getting better at than actually directing. 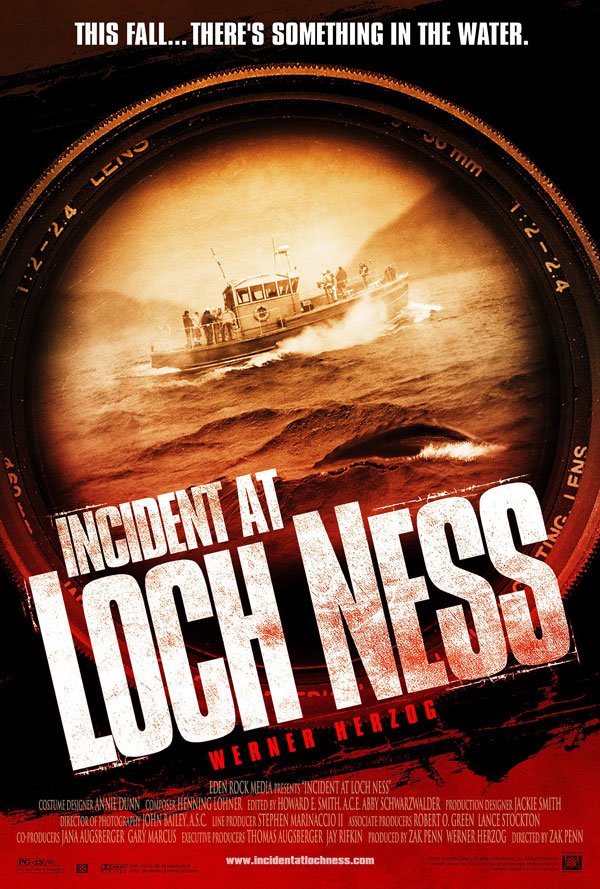