“It’s a passionate and messy film portraying loneliness, societal cruelties and victimization as powerful as its ever been presented on the screen.”

The film opens with a voice-over by Rainer Werner Fassbinder warning us that nature is part of us and can’t be avoided, as he states “Every seventh year is a lunar year. Those people whose lives are essentially dominated by their emotions suffer particularly strongly from depressions in these lunar years. The same is also true of years with 13 new moons, albeit not quite so strongly. And if a lunar year also happens to be a year with 13 new moons, the result is often a personal catastrophe.” This film will be about such a a personal catastrophe.

Fassbinder’s biting psychological drama (sponsored with his money and therefore much more uncompromising than his state sponsored films) will follow the last five days in the life of an unhappy transsexual in Frankfurt named Elvira Weishaupt (Volker Spengler), whose longtime live-in lover (Karl Scheydt) splits over an ongoing feud and leaves her heartbroken and in tears. Cared for by a hooker named Zora (Ingrid Caven, the one time wife of Fassbinder) after being ditched on the same morning he’s beaten in an industrial park while cruising for a man, dressed as a man, but when discovered to be a woman he is beaten by the man’s confederates. Zora is no better off than she is, living right on the poverty line without a man to look after her but proves to be the only one who offers him some support, albeit, in her limited capacity.

Elvira’s story is a sad one of someone betrayed by love who will in the end take his/her life and the film will ask the viewer to determine if what he did was deplorable or somewhat understandable or maybe even acceptable. It’s a passionate and messy film portraying loneliness, societal cruelties and victimization as powerful as its ever been presented on the screen. Though the film doesn’t ask or want the viewer’s sympathy as evidenced by the icy and distant way it was shot, it’s a film that oozes with compassion for the victimized heroine and where contradictions become the norm in the bizarre world Fassbinder envisions that searches for clues about his heroine from his/her past, through lovers, the bustling mysterious streets of Frankfurt and in the world events. It plays out as a response to the suicide of Fassbinder’s own lover Armin Meier (he was an actor who was in several of Fassbinder’s films and overdosed on sleeping pills on the director’s birthday) taking place just before the shoot and after their break-up, as it calls out for deeper responses than self-pity or words of regret.

Elvira dressed as a woman and accompanied by Zora for moral support visits the Catholic orphanage he was raised in to get answers about his past. Sister Gudrun (Lilo Pempeit) remembers him as Erwin and tells him that his mom Anita, who gave birth to him in secret, gave him up for adoption at birth when his cruel father was in a prison-of-war camp during WWII. When a wonderful young couple wanted to adopt the youngster when he was 8 and he was overjoyed, the mother would not allow it because her hubby who returned from the war would have to give his consent and she didn’t want him to know about the child born out of wedlock. The family had three other children at home, and she was also burdened with anxiety over finances. The child after rejected for adoption radically changed his behavior from being a good student and courting favor with the sisters and being a favorite of theirs to becoming unpredictable (something not tolerated by the sisters), a poor student and a social outcast who eventually turned to criminal behavior. The kindly Sister Gudrun was ill and couldn’t help when he had to choose an apprenticeship, and though Erwin wanted to be a goldsmith the sisters had him trained to be a butcher. While in training he lived alone in a room above the butcher shop and met the boss’s daughter Irene (Elisabeth Trissenaar) and after three years of an awkward relationship they both passed their exams at the same time: he the journeyman’s test and she passed the university-entrance exam. They celebrated together and when her father feuded with her, she suddenly changed her tune about Erwin, whom she previously mocked as unsuitable, and slept with him. This resulted in her pregnancy and she rebelled against her folks and married Erwin when both were 18. Irene gave birth to a daughter, Marie-Ann, and worked as a teacher. We see Marie-Ann (Eva Mattes) as a happy young lady who respects her father even after the couple have long split-up in a friendly divorce after a passionless marriage.

The heart of the film centers around the person Erwin thought he loved the most, a survivor of the concentration camps named Anton Saitz (Gottfried John), who upon his release went from running a meat-packing firm, to a string of whorehouses and finally to being one of the most powerful financial brokers in Frankfurt. Anton applied the same methods his captors in Bergen-Belsen used to his capitalist ventures and found they work perfectly. While working for Anton’s slaughterhouse Erwin, who thought of himself as straight, had fallen in love with Anton and got up enough courage to tell him this. Anton in a casual joking manner replied, “Too bad you aren’t a girl.” That remark sent Erwin to Casablanca for a sex-change operation and he came back as Elvira, but found he was still rejected.

This unusual deeply affected personal film can also be taken as an unscientific study filmed in an emotionally operatic way about how fucked life could be and the humiliations the innocent go through when they try to please others instead of themselves. However one views it, it’s hard not to have some strong opinion and the more sensitive might marvel at the way it seamlessly connects a person’s well-being with the personal, the worldly and the cosmic. As in all Fassbinder films, the acting is great. 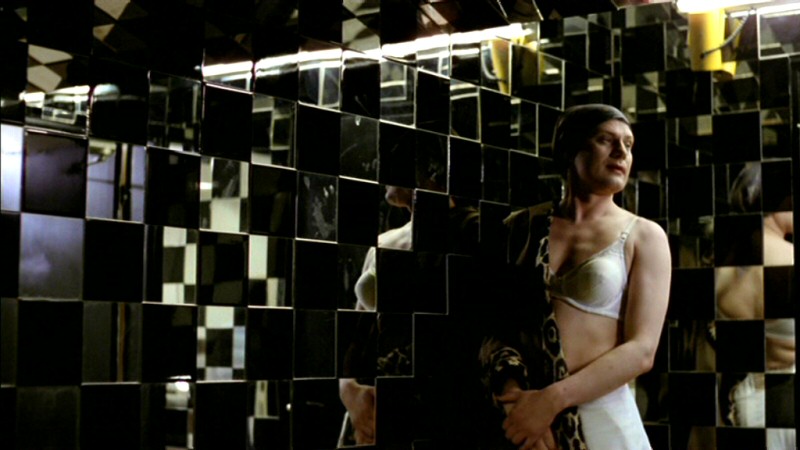