IN A LONELY PLACE

“A top-notch film noir about the loneliness and despair in Tinseltown.”

A top-notch film noir about the loneliness and despair in Tinseltown, which is more a weighty melodrama than a murder mystery. The murder mystery is no great mystery since we see for ourselves that the cynical, alcoholic, depressive, hot-tempered, abuser of women, screenwriter, Dixon Steele (Bogart), did not kill the hatcheck girl at Paul’s restaurant, Mildred Atkinson (Martha Stewart-wife of the comedian Joey E. Lewis), when he invites her over to his apartment to tell him about a book he’s supposed to read. He doesn’t read the book himself, because he knows it’s trash and to him it’s just another hack script job he’s taken on because he needs to make some fast money.

The police question him and believe he’s the number one suspect because of his history of violent temper tantrums and his unemotional response to the news that Mildred’s been brutally murdered.

Dixon’s questioned by someone who served under him in the Army, Sergeant Brub Nicolai (Lovejoy), and by the detective’s boss, Captain Lochner (Reid). They tell him that after he gave the girl $20 for cab fare, she was found strangled to death and her dead body was thrown out of a speeding car. Since Dix went to sleep right after directing her to walk a block to get a cab, he has no alibi. But to his rescue comes an attractive new tenant in his building, Laurel Gray (Gloria Grahame-wife of Nicholas Ray; they broke up during the filming of this pic and later on divorced), who claims she saw from her patio the hatcheck girl leave alone.

This meeting at the police station leads to a hot love affair between the two, though the police are still baffled by the crime as no motive was established. There is only one other suspect, Henry Kesler, who was Mildred’s boyfriend. His alibi is that he remained home all night with his parents whom he lives with.

The beautiful Laurel stimulates the genius writer to write again, and he falls in love. He makes his longtime agent, Mel Lippman (Smith), happy that he’s seriously working on the script. This is something he hasn’t been able to do recently, as he is looked on by the Hollywood community as a washed-up has-been.

The romance is, at first, everything Laurel ever wanted, but soon becomes troubling to her, as she had just left a wealthy real-estate man because he was abusive and Dix starts acting in the same way. She witnesses’ Dix’s insecurities, his jealousy, his angry mood swings, and watches in horror as he nearly beats a man to death because he called him a name. She’s in love with him and responds to his warm side, but is also frightened of him and is unsure if he is not really the murderer. These doubts are reinforced by the captain, who reminds Laurel of how violent he is when he questions her alone. She also receives no reassurances from the ‘normal’ suburbanite couple, Nicolai and his wife. The situation is only intensified by Nicolai, who under the captain’s orders has Dix come over the house to meet his wife and have dinner. The first time there Dix becomes upset that he’s suspected by the police, and he doesn’t help his situation by telling the couple how he thinks the murder happened. He says he knows from his experience writing scripts for murder mysteries how to commit murder, that he has killed off many people and many in such novel ways. The second time he brings Laurel to the Nicolai’s house and when Mrs. Nicolai lets it slip out that she saw the captain alone and didn’t tell Dix, he goes into a rage.

Laurel promises to marry Dix because she’s too scared to tell him no, as she plans to secretly fly alone to New York. But Dix finds out and in a rage tries to strangle her. Mel had warned Laurel that Dix has a tremendous ego and can’t take defeat, as he tried to ease things of Laurel leaving him by getting the finished script to the producer so he could hear the good news if the script is accepted and at least be comforted by that. Ironically, the police call Dix after the spat and mention that Kesler confessed to the murder. But this comes too late for them, as she could never trust him again after experiencing his rage.

Ray was interested in capturing the sleaze, alienation, and failures his Hollywood antihero is faced with. For Ray, the world inhabited by the lovers is a bleak, noir world, where love is not enough to bring people together who distrust each other because of their past experiences and hurts. Dix’s idea of love is making breakfast for his girl, hardly a poetical romantic notion but more a notion the common man might have. But Dix is too excitable and doomed to failure to live an ordinary life of making breakfast for his wife, as his passion can only last for a few weeks before all his insecurities return and his anxiety makes him become blind with anger. It’s the kind of temperament that could swing across the pendulum from a loving warmth to an insane rage. Dix was certainly capable of doing the murder, that is if the hatcheck girl ever got under his skin. Dix is not a very pleasant noir character; he’s someone trapped in his dark emotions, left in a lonely place where he can’t work out his problems and can only be viewed as someone who is too alienated to make positive relationships. Dix’s only past and possible future success, will most probably come from the genius of his work. His love life can be summed up by the pulp phrase he wrote for the romantic screenplay he was working on: “I was born when she kissed me. I died when she left me. I lived a few weeks while she loved me.” 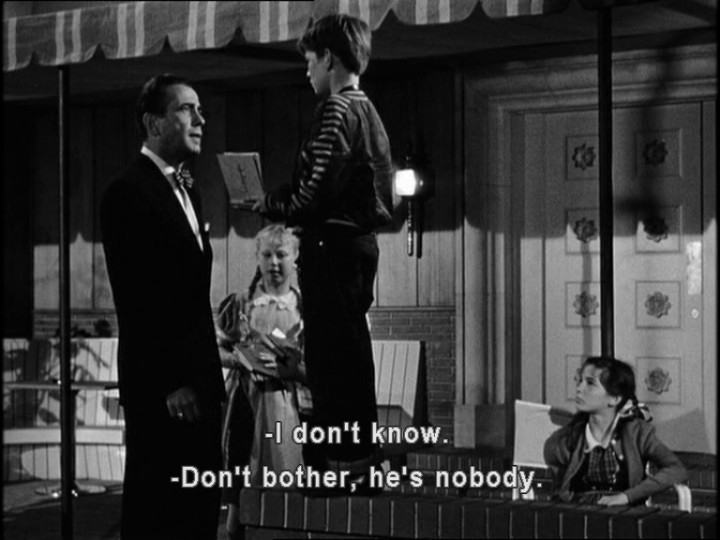