“If in the hands of a more exciting director this could have been top-grade film noir.”

Enjoyable B-film crime drama helmed by the limited Arthur Lubin (“Francis”/”Mr. Ed”/”Phantom of the Opera”). If in the hands of a more exciting director this could have been top-grade film noir and would not have been shot in such a flat style. What makes it appealing is the superb supporting cast, led by a wily performance from the great Charles Coburn. It’s based on a story by Jay Dratler and is written by him and Dorothy Reid.

The hotshot production manager of a large industrial company based in San Francisco, Walter Williams (Brian Donlevy), is on way to Tahoe, California, to complete the purchase of three factories, but agrees to give his wife Irene’s (Helen Walker) cousin Jim Torrence (Tony Barrett) a lift. Loving hubby Walter is unaware Jim is not a relative but his wife’s lover and is planning to kill him on the road. After Jim causes a flat on the California highway, he conks Walter hard on the head with a lug wrench and leaves the unconscious vic for dead in a ditch near the highway. Fleeing in a panic Jim crashes Walter’s Packard into a truck and the explosion leaves no identity of the charred corpse, so the police assume it was Walter’s body. Gruff homicide detective, Lt. Quincy (Charles Coburn), investigates and uncovers that Irene had a lover and soon gets enough evidence to charge her with murder. Meanwhile Walter suffers from temporary amnesia until reading the newspaper articles about Williams killed in the crash and out of spite decides to say nothing that he’s alive when he learns his wife is charged with his murder. Walter ends up in a small town in Idaho and is hired by widowed garage owner Marsha Peters (Ella Raines) to be her auto mechanic, where he works for three months until urged by Marsha to tell Lt. Quinn the truth. A twist has Walter now suspected of killing his wife’s lover and going on trial for her murder. One witness counted on by his side is his loyal maid Su Lin (Anna May Wong, former star in the silents), but she vanishes in Chinatown. We learn she does so in fear of giving damaging evidence against Walter about a vase broken in the apartment before Walter’s car trip, which she interpreted as an argument between husband and wife. 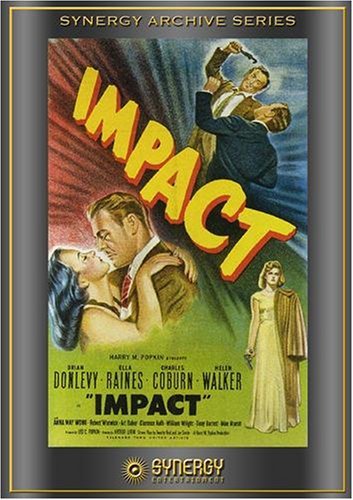