“Enjoyable as a curio.“

This was Mae West’s second feature, after starring earlier in the year with a young Cary Grant in the smash hit She Done Him Wrong (1933). I’m No Angel proved to be West’s biggest commercial hit, and is credited with saving Paramount from ruin. In 1934 the Production Code became enforced and the censors banned West’s first two features for the next thirty years thanks to pressure from the Legion of Decency. Director Wesley Ruggles (“No Man of her Own”/”Bolero”/”True Confession”) keeps things freewheeling, almost shapeless, with the focus on the hot West tossing out snappy dialogue throughout, in the form of sexual innuendos. Enjoyable as a curio, as the laughs are free-flowing even if the pic is outdated.

Tira (Mae West) is acarny dancer and singer of such racy songs as “Sister Honky Tonk,” and on occasions is a lion tamer for a circus. A gentleman from Dallas wearing a huge diamond ring comes up to her hotel room for a nightcap after the show, whereupon the circus’s resident pickpocket Slick Wiley (Ralf Harolde), her unwanted career criminal hanger-on pal, suddenly appears and knocks the gentleman unconscious and robs his ring. Later Slick’s arrested and sentenced to prison. Big Bill Barton (Edward Arnold), the circus owner, advances Tira money for a lawyer to avoid prosecution on the condition that she put her head in a lion’s mouth as part of a new touring act. The new act becomes a smash hit, whereby Tira gains wealth and fame and a string of men admirers. Tira settles down in NYC, where she has a swell penthouse pad and a number of black maids tend to her vast needs. In a classic line, Tira tells the head maid, Beulah (Gertrude Howard), to “Peel me a grape.”

After the NYC show Tira’s visited by a number of ‘silk hats’ and one of them, though engaged, rich playboy Kirk Lawrence (Kent Taylor), becomes her boyfriend for a week and showers her with expensive gifts. Tira is not bashful with leading a number of wealthy men on, but she considers them all suckers. Kirk’s cousin and even richer business associate, Jack Clayton (Cary Grant), calls on Tira in her pad to ask her to give up her relationship with Kirk on behalf of his blueblood snooty girlfriend Alicia (Gertrude Michael). Before you know it, the two are lovebirds. Tira will only see Jack and tells Beulah she’s met her man at last, after making sure by checking her horoscope. The two plan to wed and Tira tells her slimy boss she’s quitting the show, saying there’s a loophole that allows her to quit if she can show good cause–like marriage. So Big Bill hires Slick, just released from prison, to be in Tira’s penthouse when she’s out because of car trouble he arranges with his chauffeur. When Jack arrives for a visit, Slick is in pajamas and pretends to be her boyfriend. An angry Jack, believing he’s being two-timed, cancels the wedding. But Tira gets her grating weaselly lawyer (Gregory Ratoff) to sue Jack for breach of contract. In court, Tira successfully cross-examines the witnesses who are there to show she has a bad reputation. When Jack realizes that he still loves Tira and she still loves him, he allows her to win the case. The lovebirds reunite, and when she refuses to accept the hefty lawsuit settlement they plan on marriage.

Mae West is in top form, basically playing herself. The risque pic might not be as smart as it thinks it is, but it was good escapist fare for the Depression-era crowd and it’s a pleasure to see how a pic looked back then when not censored. 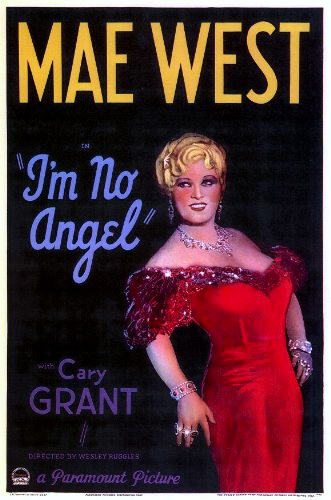