I LOVE YOU, MAN

An awkward one joke sitcom bromance comedy that thinks it has something to say about male friendship that’s worthwhile and funny that all the other male buddy movies haven’t said, but farts away its chances by shooting for cornball sentimentality and ends up stepping on dog poop instead. Director John Hamburg (“Tick”/”Safe Men”/ “Along Came Polly”), who doesn’t seem to have a nose for standard issue comedy though he keeps trying to get the smell of it, steers his movie to those who dig the Canadian rock band Rush, think anything about Venice Beach is cool, relish guy speak over Valley girl speak and those that get hard when straight guys talk about jerking off. It’s based on a story by Seinfeld writer Larry Levin and cowritten by Hamburg and Levin. Executive producer Ivan Reitman takes a crack at tapping into Judd Apatow’s demographic cash cow young male dating age or newly married men fanbase, and shows that his boys can talk the Apatow gross-out talk to earn its indelible stamp of approval. However, the thin story seems better suited for a skit on SNL than to be a full-length film.

Wussy, cloddish, buttoned-down, ambitious and friendly high-end real estate agent Peter Klaven (Paul Rudd), a smarmy Mr. Nice Guy, gets engaged to attractive nice girl Zooey (Rashida Jones), Miss Perfect, who wears panties with peace signs, in what seems like a match made in heaven or by J.D. Salinger. The big thematic problem that arises is that Peter, a ladies man, never made male friends and is embarrassed by Zooey and her business partners and best friends, Hailey (Sarah Burns) and Denise (Jaime Pressly), that he has no one to ask to be a best man. When Peter serves the girls root beer floats and overhears the gossipy friends tell Zooey that you can’t trust a man who has no men friends because he will always be clingy, he becomes determined to get himself a guy pal.

With that said, Peter elicits the help of his amiable mom (Jane Curtin, SNL alum) and his gay hunky gym fitness trainer brother (Andy Samberg, current SNL player). But Peter has no such luck gaining a guy friend after going on a number of awful “man dates,” with one misjudged date (Thomas Lennon) ending in a soul kiss. But at an open house Peter gives to try to sell the multi-million dollar luxury house of TV’s Incredible Hulk, Lou Ferrigno, the archetype of manhood, he meets his opposite–the boorish ‘guy’s guy’ Venice Beach free-spirited ladies man Sydney (Jason Segel), an investment consultant, who came there for the free grub and to pick up divorcees. The two after meeting on the cute hit it off like a real romance, and freely go on a few awkward man dates to pubs, hang out listening to Rush in Sydney’s “man cave” (that is equipped with electric guitars, a masturbation station, a bong, La-Z-Boys and big-screen televisions) and there’s a walk on the Venice boardwalk with Sydney and his mutt named for Anwar Sadat (who shits on the boardwalk and the crass Sydney provides no pooper scooper to the annoyance of the pedestrians).

Sydney, in his easy going cocky way, loosens up the strait-laced Peter, whereas the uptight realtor tells his new bud confidential things about his love life he never told anyone else and learns from his new friend how to sell Ferrigno’s mansion the ‘new fashioned way.’ When Zooey seems ready to break up the relationship because she’s threatened by the friendship, a dull and unfulfilling resolution follows as the film overstays its welcome. It ends in the usual rom-com comfort zone after a few patched together strained twists thrown into the plot line to give us a tame feel-good ending of hetero love conquering all, as a strong mist of emptiness oozes out from its climactic wedding scene.

Other supporting actors of note include Jon Favreau as the irksome husband of Zooey’s friend Denise; J.K. Simmons as the loud-mouth father of Peter’s, who is accepting of his gay son and by the third act also accepts his heterosexual son (the twist being you would expect the acts of acceptance to be in the reversed order); and Rob Huebel as Peter’s pushy back-stabbing rival in the real estate office, who tries stealing the Ferrigno account.

For fans of this kind of potty-mouthed humor, you should get excited that the movie includes the obligatory vomit, defecation and fart jokes–which seem to be the building blocks for such immature male made comedies. 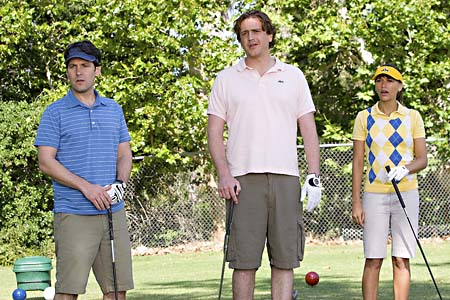