I’LL SEE YOU IN MY DREAMS

Michael Curtiz (“Romance on the High Seas”/”White Christmas”/”Young Man With a Horn”) directs this forgettable, overly sentimental, hokey, formulaic musical biopic about prolific popular songwriter Gus Kahn. It focuses on the steadfast relationship between the composer (Danny Thomas) and his assertive wife Grace (Doris Day) and his musical creativity. This critically unsatisfying film was a box office smash; it was Warner Brothers’ second-highest grossing film of 1952. It’s based on a story by Grace Kahn and Louis F. Edelman, and is written by Melville Shavelson. Some of the songs featured include the following: “Shine on Harvest Moon”, “It Had to Be You”, “Yes, Sir, That’s My Baby”, “My Buddy”, “Toot Toot Tootsie”, “Carolina in the Morning”, “Love Me or Leave Me”, and “Makin’ Whoopee.” At least the singing is agreeable–Patrice Wymore is stunning as a singer in Florenz Ziegfeld’s “Whoopee” and also belts out “Carolina in the Morning” and “Love Me or Leave Me.” Doris Day competently handles most of the other tunes.

It opens in Chicago in 1908, where aspiring lyricist Gus Kahn tries to get music company clerk Grace LeBoy to read his latest lyrics. The persistent Gus appears at her house and is invited by her parents to dine with them. While Gus dines, Mr. LeBoy (Harry Antrim) recites from “Songs from the Portuguese” by Elizabeth Barrett Browning. Feeling beneath this sophisticated family, the bashful Gus leaves dejected but does leave his lyrics with Grace. She likes them, and provides the melody. When her company boss refuses to buy the song named “I Wish I Had a Girl,” she sells it to Fred Townsend (James Gleeson). Grace promotes it and it becomes a best-seller. Soon the couple marry and Grace becomes pregnant, prompting Gus to write “Pretty Baby” in her honor. Gus writes “The One I Love Belongs to Somebody Else” and when Fred doesn’t buy it after Grace sings it to him, she hawks it to impresario Sam Harris (Jim Backus).

The story follows Gus’s upswing in career and marriage and the sad moment when he loses his savings in the 1929 stock-market crash. Through it all Gus has the support of his loving wife and friends such as writing partner Walter Donaldson (Frank Lovejoy), his loyal housekeeper and nanny to their two children (Mary Wickes)–she stayed on during the Depression without pay– and producers Sam Harris (Jim Backus) and Flo Ziegfeld (William Forrest), as he slowly gets back and on his feet again.

The routine story has a warm Danny Thomas in the lead and the energetic Doris Day as the costar (but top-billed). 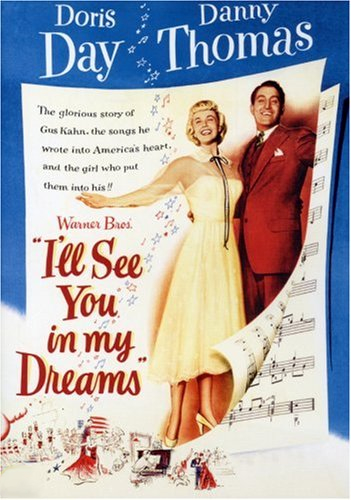