Enfant terrible French auteur Leos Carax (“The Night Is Young”/”The Lovers on the Bridge”/”Pola X”), as his first feature film, directs at 24 this low-budget personal vision film in black and white. It’s about doomed love in Paris among youthful lost souls and the failure they experience over performing sex. The story is slight and the film is plot-less, but the photography is magical, the atmosphere is pensively poetic and the weird scenario is gripping. It leaves an indelible mark on the viewer who is able to overlook its indulgences and get into its unique nocturnal look at Paris for those romantics who are misfits.

The aimless 24-year-old Alex (Denis Lavant), the director’s alter ego, has broken up with girlfriend Florence (Anna Baldaccini), who immediately recruits Thomas (Christian Cloarec) as her next boyfriend. Set to report for army duty tomorrow, the wannabe filmmaker Alex is upset that he’s been rejected by Florence and is obsessed with finding another lover and some fulfillment for his empty life. After listening to music on headphones in his bare garret apartment, he checks his penciled on the wall map of the sites in Paris where he experienced important personal events. Then he leaves to go shoplifting for records and leaves them at Florence’s door with a love letter he slips under her door, and walks the night streets of Paris alone. He stops only to play pinball in loser cafes, until he finally stumbles upon a couple breaking up via the building intercom and crashes the party by posing as a friend of the postal worker Bernard (Elie Poicard). He’s admitted by the ditzy middle-aged hostess even though Bernard has just left after his breaking up with the sullen failed actress Mireille (Mireille Perrier). Alex lucks out because when Mireille wants to be alone, she joins him in the kitchen for a cup of tea. Enchanted with Mireille’s aloofness, strangeness and ghost-like voice, Alex falls in love with her, but a love connection for the two lost souls is hardly possible in such a morbid film.

It’s the kind of film that reminds me of Eraserhead (1977), and makes me want to embrace it in the same way. 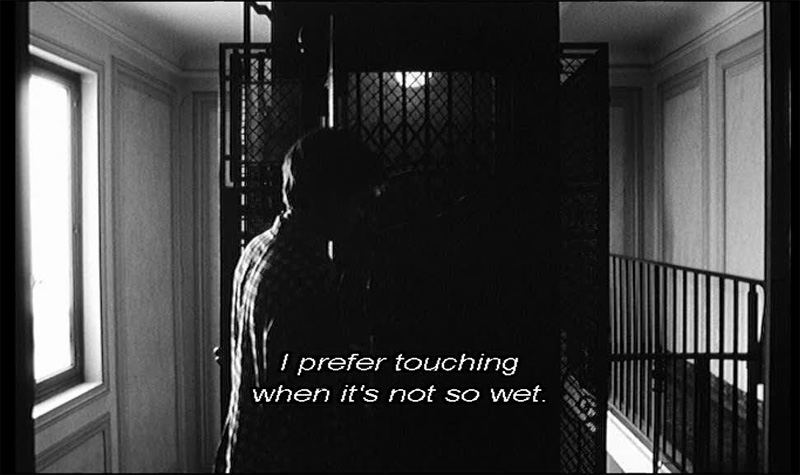