I KNOW WHO KILLED ME

“It might not be a good film, but it has its perverse fascinating moments.”

A great title, a lousy film. Mediocre indie director Chris Sivertson (“The Lost”/”All Cheerleaders Die”) and first-time writer Jeffrey Hammond work with the troubled off-the-camera star Lindsay Lohan in this sleazy psychological thriller. It might not be a good film, but it has its perverse fascinating moments.

In the quiet suburbs of New Salem a model high school student Aubrey Fleming (Lindsay Lohan) is abducted and tortured by a sadistic serial killer. Aubrey is a talented pianist and an aspiring writer, who is the latest victim of the maniac. The maimed Aubrey manages to escape, but tells her rescuers that she’s the stripper Dakota Fleming and that Aubrey is still held captive. As Dakota, she takes on her smutty personality, treats her parents as dirt and mocks the feds.

The pic unravels as a second-rate slasher film, that makes about as much sense as Lohan’s real life. When Lohan talks tough as the stripper person she created, it’s unintentionally laughable but is the only thing this pic has going for it.

Throughout the ordeal Aubrey’s parents (Julia Ormond & Neal McDonough) are confused, as are the viewers. 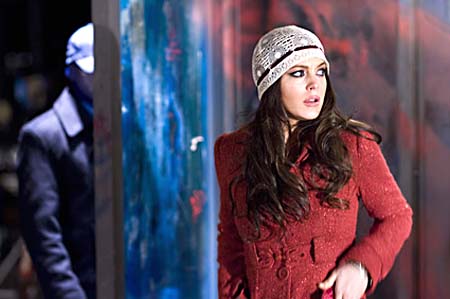