“I was just not moved by this satire/drama.”

Kieran Culkin is Igby Slocumb. He’s an obnoxious, whiny, self-absorbed lying brat, who gets bounced from one elite East Coast boarding high school once too many times and this time is sent to a military school as punishment by his detestable, cold-fish, society mother, Mimi (Susan Sarandon). But he manages to hide out in the bohemian environment of a Manhattan Tribeca loft without attending any school when he’s also bounced out of the military school.

His given name is Jason, but Igby was the name of a childhood toy bear called Digby which he loved but mispronounced as Igby; and, whenever he lied, which was always, his family called him mockingly Igby– which stuck. Burr Steers (his mother is Gore Vidal’s nephew), the Washington D.C. residing actor (he was in The Last Days of Disco) and stage director, is the first time writer/director of Igby Goes Down. He seems to be making some kind of autobiographical attempt to see what he could do with the usual teen angst motif in this post-yuppie generation yarn, something Salinger’s Holden Caulfield once personified way back when for his “nuclear generation.”

Steers’ film zings the wealthy dysfunctional WASPish Slocumb family that resides in Georgetown but has some NYC connections through the real-estate mogul D.H., who takes an uncharacteristically benevolent interest in looking after Igby. The film has the similar oddball and uncaring family theme as the recent “The Royal Tenenbaums,” and you can name a long line of such themed films with a younger male having sex with an alluring older woman from “The Graduate” to “Tadpole.” This one is just nastier than the others.

Igby’s useless father Jason (Bill Pullman) couldn’t hack the pressures any more and has a nervous breakdown; he ends up as a veggie in a Maryland funny farm. This leaves the selfish, pill-popping, anti-Semitic, haughty, and overbearing bitchy mom to take charge of her sons, as she adjusts to life by doping herself up on prescription pills. Her cynical mom routine works for her eldest son Oliver (Ryan Phillippe), an unctuous replica of her, who has no trouble conforming to what is expected of him and going after what he thinks he wants. But Igby is just filled with self-pity and a nasty attitude, and is too nerdy to have friends his age as he suffers as a lost soul from alienation and loneliness. The question that lingers: Will Igby’s life experience compensate for his poor school record and allow him to grow into a real man with loving feelings? The answer is not given, except one expects that the correct answer would be that Igby has learned that life is more than living day to day.

The film goes over-the-edge in its black comedy. But Steers by creating a very clever twist for an ending, clears the air of his tasteless opening scene — where the fumbling brothers place a plastic bag over their sedated and poisoned snoring mom until she’s dead. It, at least, leaves matricide off the table as one of its missteps and makes the film, to its credit, unpredictable. Still it never solves its problem of making anyone likable or even bearable, and Igby is still so despicable and demanding. His pompous Columbia University economic student brother Oliver says of him: “I think if Gandhi had to hang out with you for an extended period of time, he’d have beaten you up.” It’s very hard to sympathize with such a brat, which is the film’s main problem and something it never quite overcomes.

The main thrust of the plotless story, which is instead built around small episodes, revolves around Igby working on painting a NYC loft for D.H.. He is the landlord for his trophy mistress Rachel (Peet), who’s a heroin addict and a sometimes dancer. For sleeping with D.H., she gets to use the place as a dance studio for free. Rachel’s best friend is the pretentious performance artist Russel (Jared Harris), a painter who does not paint, whose sexual orientation as well as anything else about him is never made clear. He befriends Igby and takes him around the seedier parts of town (the film never does much with NYC as a backdrop) and gets him involved in dealing grass, which gives the kid another adult to look down to. The kid also shares some bedtime with Rachel, and when the ever-smiling sleazy landlord finds out he reacts by giving the kid a beating. The film’s title refers to the many physical and psychological beatings the kid gets from the adults who surround him.

On the summer weekends Igby resides with D.H. and his dim-witted wife Bunny (Weston), at their posh Hampton home. At a party in D.H.’s beach house, where Rachel is boldly invited in spite of Bunny’s presence, Igby makes the acquaintance of a bored Bennington College drop-out, Sookie Sapperstein (Claire Danes), who is unsure of what she wants to do in life and is working as part of the catering crew and doing other odd jobs until she gets her head together (all the arty types in this flick can’t seem to get their act together). The only thing that seems to really upset her, is when she’s called by Igby a JAP (Jewish American Princess). This mixed up daughter of Jewish intellectuals ends up sleeping with Igby a month later back in NYC, but only because she’s amused by him. It amounts to a soulful relationship between two misfits who haven’t matured, but becomes a relationship he takes far more seriously than she does. When she is pursued by his brother who is her same age, she falls for him despite all their differences. This is almost the last straw for Igby who hates his obedient, watchdog, Young Republican brother, and feels betrayed by Sookie’s rejection of him as a lover (shades of the teen protagonist in “Rushmore”).

The movie is uneven, it drifted too much off course going from social realism to satire without ever really establishing itself in either medium. I was just not moved by this satire/drama. 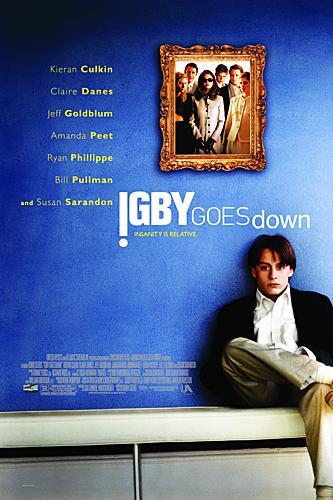