IF I WERE KING

Frank Lloyd (“Oliver Twist”/”The Sea Hawk”) ably directs this witty fictionalized historical adventure tale of the French 15th century vagabond poet Francois Villon (Ronald Colman), who leads the Parisians in an uprising against the cruel King Louis XI (Basil Rathbone) and thereby saves his kingdom by getting him to temporarily change his ways. The sharp screenplay by Preston Sturges is based on the novel and play by Justin Huntly McCarthy.

It was well-received by critics and did a healthy box office. It’s set in the Paris of 1463, when the rabble-rouser vagabond poet François Villon led a raid to steal food from the personal food storage depot of the bad ruler, King Louis XI, that he distributes to the starving people. When arrested in the Fir Cone tavern his cutthroat friends frequent, the excellent swordsman Villon kills the oppressive Grand Constable of Paris (John Miljan) in a brawl. The ineffective but cackling king learns that the dead man was a traitor, in the hire of the king’s enemy, the Duke of Burgundy. As the Burgundians keep invading Paris and the King’s army fails to stop them, the King is perplexed on what to do. So on a whim, the King asks his captive Villon, a thief and killer–but who killed a traitor, what he would do if he were king? Satisfied with his response, he dubs Villon as Count de Montcorbier and makes him his new Grand Constable. Meanwhile Villon meets in the court Katherine DeVaucelles (Frances Dee), a lady-in-waiting with whom he had fallen in love with when first seeing her in church. She suggests by taking all the food in the depots and distributing them to the people, the generals who refuse to fight the Burgundian would have to or else they would starve. The downtrodden people pledging loyalty for the first time to the King are led by Villon and hold back the invasion. Thereby the generals only have their army do mop up duty. But the King believes it was only the generals who gave him victory and plans to execute the fighter poet for murder until Katherine talks him out of it, as the King now realizes the poet is a hero and calls off the execution but banishes him as an exile forever from Paris. The verbal duels between Rathbone and Colman make this an entertaining and well-conceived comical adventure tale, as Colman must use his smarts to survive the wrath of the crafty monster king. It’s alright if you are reconciled that all the pageantry and storytelling is pure Hollywood hokum. 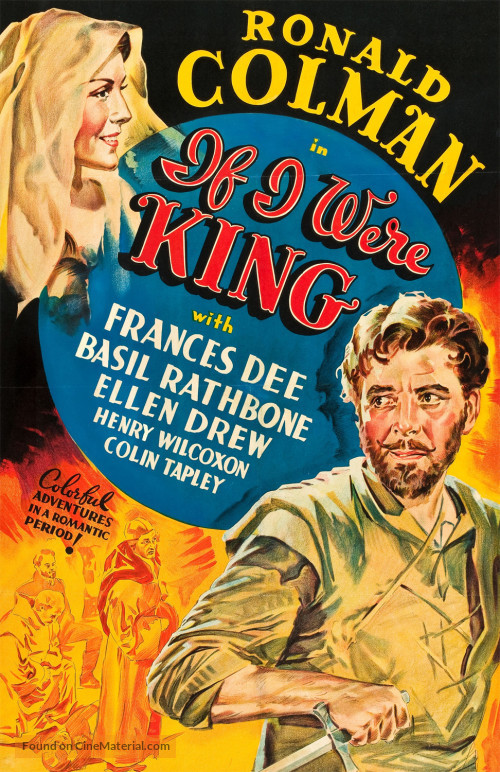