“A gorgeous film that won’t disappoint.”

Tsai Ming-liang (“Rebels of the Neon Gods”/”The River”/”The Hole”) for his eighth feature shoots his typical themed film about alienation, loneliness, desires, and urban woes caused by industrialization, but for the first time uses his hometown of Malaysia as his location. It’s an enigmatic, moody, dreamlike film that the gifted Taiwan-based director beautifully sets in Kuala Lumpur (the capital city), and in his usual inimical minimalist style lets the pictures do most of the talking—the conversations are almost non-existent. The film was commissioned for Vienna’s New Crowned Hope project, which celebrated Mozart’s 250th birthday.

Street swindler thugs badly stomp out a homeless Chinese man (Lee Kang-sheng) after he annoys them by approaching them with no money as they work their con game, as they think he’s trying to con them. The homeless guy is nursed back to health by Rawang (Norman Atun), a construction worker from Bangladesh, who was hauling an old abandoned mattress with others back to their makeshift home in one of the abandoned cavernous construction sites that’s flooded when he spotted the unconscious stranger lying on the street.

The group of illegal workers Rawang lives with come from many different countries, as they first arrived in Kuala Lumpur during the economic boom when workers were needed. But due to the Asian economic crisis of the 1990s there was a halt to most work projects and now the illegals do their best to try and eek out a living.

Rawang shares his bed with the homeless stranger and falls in love with him, even though they speak different languages. In the meantime, the bruised homeless man recovers and falls in love with a waitress named Chyi (Chen Shiang-chyi) at a local coffee shop owned by a Chinese older woman (Pearlly Chua). Chyi spends her spare time nursing her boss’s paralyzed and comatose son (also played by Lee Kang-sheng, one of the director’s regulars who plays his alter ego), who lives in her landlady boss’s apartment in the same building where she lives in the attic right above him. Soon the homeless guy seduces both the waitress and her boss, while Rawang lusts only for him.

Most people wear surgical type of masks, as fires have created a constant haze over the polluted city. The radio announcers voice suspicion that somehow the multi-ethnic foreign workers are responsible for this urban nightmare.The film’s almost incomprehensible story is composed of fables and deadpan funny situations that are linked together by the director’s strange logic, as the film ends in some kind of metaphysical mystery that proves the title was not a misprint—as the homeless guy and his waitress and male rescuer lovers are in a bed together that is bobbing like a cork on an unknown blue ethereal sea.

The film is challenging because one can never be certain about the characters, what’s really going down in the non-narrative tale and what is meant by all those odd turn of events. In its slow pace when nothing much happens, there’s charming regional pop music to ease the lull and then there’s the slow build up in lust that finally gets acted on before the third act concludes. It’s a film, like all the other films of the director, not mainstream friendly; but for those who love a bizarre ambiance, something original and artistic, and can live with a mystery ending—then this is a gorgeous film that won’t disappoint, especially for fans of the director. 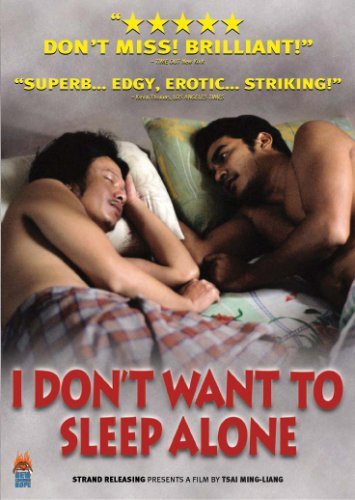