HOTEL BY THE RIVER

Younghwan (Ki-Joo-Bong) is an aging, disheveled, celebrated poet who summons his two semi-estranged grown sons, Kyungsoo (Kwon Haehyo) and Byungsoo (Yu Junsang), to a wintry setting waterside hotel, on the river Han, as a free guest of the hotel owner, a fan of his, when he thinks he’s dying and wants to go over with them some loose ends in his life. The poet has no ailments or a medical prognosis, just a gut feeling. There’s a hostility in the air due to the lingering effects of the failed marriage and that their mom still is unhappy with her ex. To make matters worse, the opposite brothers despise each other, even more so as Byungsoo’s recent success as an arthouse filmmaker makes the oafish older brother envious. The older brother also has marital woes he fails to disclose to his father, while the younger brother shuns women because he’s scared of them. One of the hotel guest’s is the gentle, unaccompanied Sanghee (Kim Minhee), who has come here to get over an emotionally painful breakup. Besides aching inside, she has a visible burn on her hand. When solitude takes its toll, she invites her best girlfriend Yeonju (Song Seonmi) to stay at the hotel with her. The ladies are flirted with by the poet, but pay him no mind. They are of the tiresome opinion that “By nature, men are just incapable of grasping love.”

The camera veers between following the women on long walks and the hostile atmosphere of the men huddling together at the hotel bar for their reunion–that seems to confirm what the ladies are saying.

The lyrical film works best as a melancholic mood piece, depicting one male soul with trying to deal with encroaching death and the other poor female soul, in a less developed story, trying to go on with life after a failed relationship. 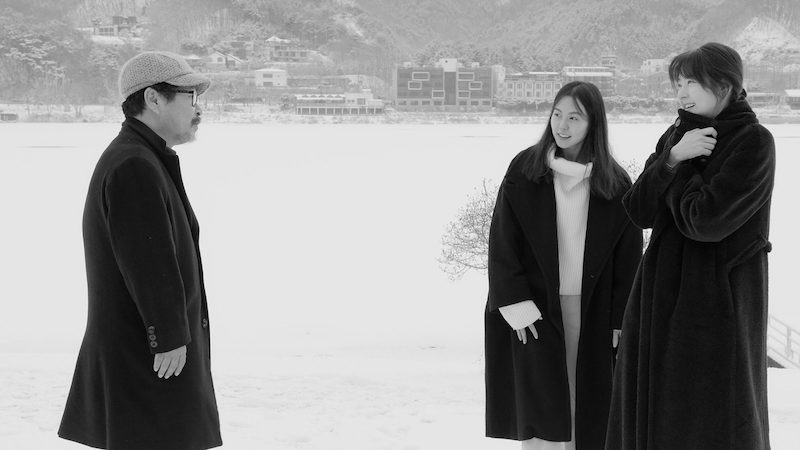