“Wears its heart on its collar.”

“The Hoodlum Priest” is the hip talking dedicated real-life Jesuit priest Father Charles Dismas Clark (Don Murray), a forward thinker who in his offbeat way started the Dismas Halfway House in St. Louis in 1959 with the help of a criminal lawyer. The priest has a special talent for working with young people, especially juvenile delinquents and therefore his church superior removes him from his teaching duties to work full-time with felons and confused youths. Keir Dullea in his film debut stars as the doomed troubled youth who cannot be saved by the priest, as he has trouble adjusting to civilian life after serving a two-year prison stretch for armed robbery.

Actor Don Murray also was cowriter with Joseph Landon and coproducer with Walter Wood, in this small-budget labor of love project that wears its heart on its collar. The humorless, grim and preachy melodrama is well-executed by director Irvin Kershner (“A Fine Madness”/”The Empire Strikes Back”/”The Flim-Flam Man”), but the dramatics are all too familiar as Hollywood scenarios to make much of an impact.

Father Clark’s radical concept on halfway houses was ahead of its time, but his arguments slipped in against capital punishment are not that convincing as he adds only questionable familiar liberal talking points without encouraging deeper thought on the subject. There’s a knee-jerk emotional responses to the Dullea character executed by the state for murdering his former boss in a heist (implying if he received help from the state, the murder could have been prevented and therefor capital punishment is only like legalized murder).

No one can argue rationally against a shelter for ex-cons being a good way for rehabilitation, as was done in the film by a thick-headed angry reporter (Logan Ramsey). But one can find fault with Father Clark’s meddling conduct. He arrogantly calls anyone he either doesn’t care for or respect a ‘square’ and knew about crimes from his contact with felons but chose not to report it to the police. Wearing a holy collar does not make him above the law, as his questionable actions would make him either complicit in the crimes or at the very least someone blurring the line between right and wrong professional conduct.

Father Clark is aided by Louis Rosen (Larry Gates), St. Louis’s top-flight criminal lawyer, and raises enough funds to open his halfway house to help the felons readjust to civilian life (which over time has proven to be a great benefit to society). Even if its social conscience message registered as merely a hollow Bible lesson, it’s still an inspirational story told with conviction that could have been better served by being a documentary. 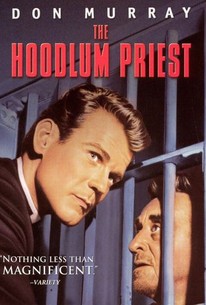