HOODED TERROR, THE (aka: Sexton Blake and the Hooded Terror)

“Tod Slaughter is a trip as the perverse villain.”

A solid crime drama programmer that’s a lesser Sherlock Holmes knock-off. It’s directed by George King (“The Ticket of Leave Man”/”The Face at the Window”/”At Dawn We Die”), who keeps it fast moving, classy, suspenseful and comical. It’s based on the novel “The Mystery of Caversham Square” by Pierre Quiroule and written by A.R. Rawlinson.

While in Shanghai, adventurer Granite Grant (David Farrar) gets mugged before embarking on a steamer to London. Miraculously he lives long enough to tell his friend Paul Duvall (Bradley Watts) that the ones responsible belong to the world’s most dangerous criminal organization, The Black Quorum. Grant has been targeted for the little he knows about the shadowy terrorist group, but since the police won’t listen he feels that London amateur sleuth Sexton Blake (George Cuzon) should be contacted and that once he finds out who the leader is that will be the end of the violent ring.

In London, Duvall is killed by a South American poison dart blowgun in Blake’s office before he can talk to him, but leaves a clue written in invisible ink on a blank piece of paper. When Blake receives little cooperation from Scotland Yard’s Inspector Bramley (Norman Pierce), he takes the matter into his own hands with the help of his bumbling assistant Tinker (Tony Sympson) and an attractive French amateur sleuth named Julie (Greta Gynt). She gets the leader of the crime gang, the multi-millionaire stamp collector Michael Larron (Tod Slaughter), all hot and bothered that he risks everything to possess her. When she refuses to be his moll, he places her in his Death Chamber of Serpents and it’s up to Blake to rescue her.

Tod Slaughter is a trip as the perverse villain drooling over both stamps and Julie, and decked out when meeting gang members in a spiffy black robe with a snake embroided on its front and a fashionable KKK-like hood. Like Vincent Price, Slaughter can make a not too original low-budget B film fun to watch. 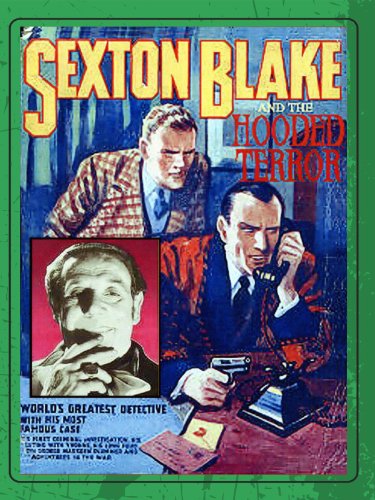