“Hopes to cash in on the Charlie Chan success.”

A creaky murder mystery starring Boris Karloff as the Chinese master sleuth, as this cheapie fourth entry in Monogram’s “Mr. Wong” series hopes to cash in on the Charlie Chan success. William Nigh (“The Strange Case of Dr. X”/”The Ape”/”I Wouldn’t Be In Your Shoes”)directs this unimaginative programmer in a workmanlike way. It’sbased on the “James Lee Wong” series in Collier’s Magazine written by Hugh Wiley. It’s written in a snappy style byScott Darling/George Waggner.Its value is watching Karloff go Chinese, which can be quite amusing.

Undercover San Francisco detective Dan Grady is murdered while on a smuggling investigation in Chinatown. Police Captain Bill Street (Grant Withers) partners with master sleuth Mr. Wong (Boris Karloff) to investigate the murder and smuggling ring. Brash reporter Bobbie Logan runs a story in the local newspaper that brings in eyewitnesses who last saw the dead detective. That leads the investigators to the Club Neptune, owned by gangster “Hardway Harry” Lockett (Frank Puglia). This leads the detectives to possible smuggler Belden (John Hamilton), the owner of a small jewelry store, and his son (Craig Reynolds), who is seeing gangster moll Tany Sarova (Lita Chevret). She works for “Hardway Harry” and is the girlfriend of crooked lawyer/businessman Forbes (Charles Trowbridge).

No problem for “Chinese copper” Wong and company in cracking this simple case in just over an hour.I enjoyed it as a time killer and that it was so goofy it didn’t even pretend to dress Karloff as Chinese. 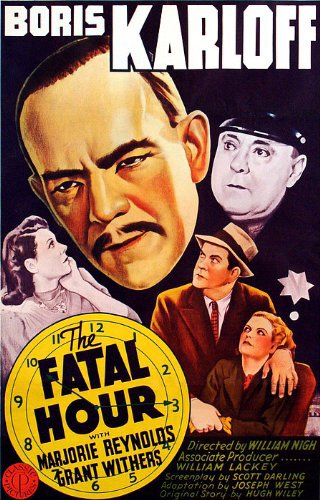