“This is a film that glows with confidence.”

This intelligent and emotionally moving film is based on the autobiography “A Genius in the Family,” written by one of the musical prodigy English sisters, Hilary (Rachel), the flautist in the Du Pre family. Jackie (Emily) is the younger sister, who surpassed her sister and reached fame as a virtuoso cellist, especially known for her interpretations of Elgar’s compositions. The crux of the film is about their sisterly relationship growing up in the 1950s as youngsters, their competition with each other, and their endearing friendship. The differences between them, that eventually has them living disparate lives, becomes the dramatic focal point. Jackie grows up to become the great musician who marries another celebrated musician, Daniel Barenboim (James), but who is very unhappy for reasons that are very complex and not easily answered but thoroughly explored. This leaves the audience the judge of what might have gone wrong. Hilary finds bliss in domesticity, giving up music to live in the country and raise chickens and children with her vibrant husband, Kiffer (David).

It is rare that a film has such a meaty part for one woman to play…this film has two such parts. The other female lead, is admirably played by Rachel as she is solid in her role as the first prodigy child to shine brightly and as the jealous sister, who finds that her sister has caught up with her talent wise and will soon surpass her. We can read her mind as she grapples with her inability to grow as a musician and when Kiffer aggressively pursues her and weds her, giving her the self-esteem she has always wanted, she will cease to be a professional musician.

The girls never seemed taken with a genuine love of music except as it suited their talents. Their strivings for success was at first seen by them as a reason to be coddled by their ambitious stage mother (Celia); then it became a chance for the sisters to remain close, each sharing the spotlight; and, then something mysterious happened, perhaps it was fate, it allowed Hilary to fall off the pedestal while the once weaker performer, Jackie, took her place in the spotlight. She took her practice to heart. At one time she did it just to keep up with her older sister, but now she does it to remain a star performer and becomes recognized by the world for her musical talent.

The stage father (Dance) is the moralist in the family. He is a stodgy anti-Semite (mom, too), whose bemused character might be summed up by his reflections on his daughter’s marriage to the Jewish Barenboim and conversion to the Jewish religion: “She can’t be Jewish, she is blonde.”

The film begins innocently on a deserted English beach, where the sisters as youngsters are played by Keely Flanders and Auriol Evans. They happily frolic on the sand and meet a strange ghost-like woman who tells Jackie in a whisper, “everything will be all right.” This ominous tone, sets a haunting mood that will replace these seemingly happy days of their youth together with their more distant adulthood.

The well-crafted screenplay by Frank Cottrell Boyce is ably directed by Tucker, who is directing his first feature film. The only fault I found, is that I thought it was unnecessary to have duplicate scenes of what Hilary and Jackie experienced; we didn’t have to see it from each one’s point of view. I thought the film would have been better served if the action was continuous, the going back over the same scenes from a different point of view really killed the pace of the film.

The sisterly relationship was so powerful and subtle, that when Jackie runs away from Barenboim for no apparent reason and winds up at Hilary’s remote country house and suggests to Hilary that she allow her devoted husband to service her, we are caught up in the intrigues of a very trying sibling rivalry one that questions sensibility and one’s mores and all the while testing the sister’s very genuine affection for each other.

This is a film that glows with confidence, sparked by a maturity for its material. It tries to unravel some of the mysteries in life that make one wonder about certain decisions made that can impact one’s entire life. The film worked because of the contrasts between the two female stars, as they prevented the film from burying itself in sadness. And the music helped also, it was simply marvelous. 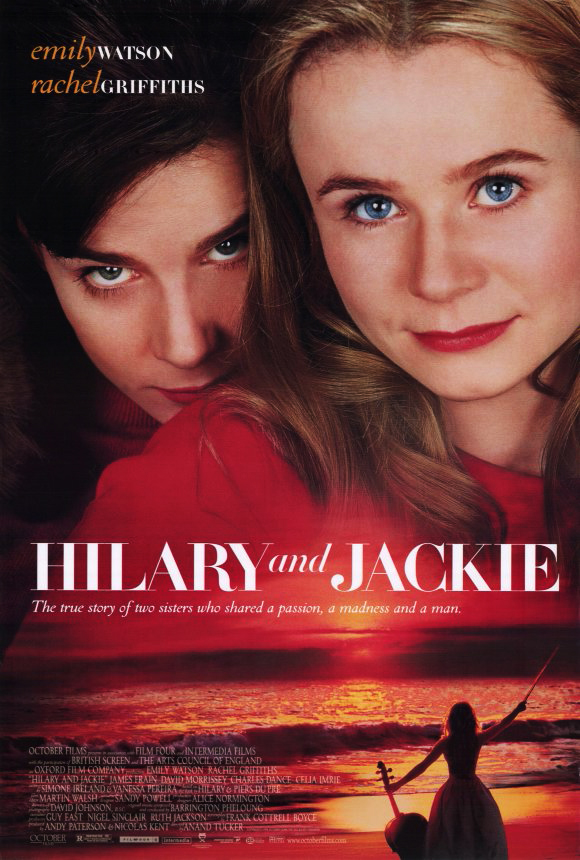