“The sole pleasure I got was in gazing at the fancy costumes and taking in the lush grounds of the snobby Lady Gresham’s estate.”

British TV director Julian Jarrold (“Kinky Boots”) tries his hand with the late 18th century English novelist Jane Austen (1775-1817) in this modest period drama that has good production values but a dull story. The faux biopic presents the young, would-be novelist, Jane Austen (Anne Hathaway), in 1795, at age 20, in a romance with the brash, playboy and impecunious Irish lawyer named Tom LeFroy (James McAvoy). The romance is an imaginary one largely dreamed up by screenwriters Kevin Hood and Sarah Williams (there was a romance briefly hinted at in a few of Austen’s letters, but this romance as depicted is of dubious value as its accuracy can’t be verified), hoping to cash in on the famed British author and her old-fashioned values of sense and sensibility: a battle cry for certain literary fans against the modern vulgarian chick-lit that is flooding the pop culture scene.

Jane Austen (Anne Hathaway) is the spirited aspiring writer and youngest daughter of Rev. Austen (James Cromwell), who live in the county of Hampshire (just outside London). The minister lives modestly with his socially conscious and talkative wife (Julie Walters), oldest daughter Cassandra (Anna Maxwell Martin), and his sons Henry (Joe Anderson) and the deaf one George (Philip Culhane). Mom frets Jane and her sister will be old maids, which is a no-no during that period when women depended on a man.

Tom Lefroy (James McAvoy) is a dashing ladies man and ambitious law student, who is sent as a punishment for his hedonist ways by his rigid disapproving uncle, Judge Langlois (Ian Richardson), to the countryside of Somerset, in thesouth-west English countryside, to stay with his distant indigent relatives so he can mend his ways before he can be rewarded with an allowance. Here he meets Jane and, at first, she’s unimpressed: thinking of him as arrogant and shallow. But the Limerick lad is persistent and finally wins her over with his boldness and intelligence. Jane’s mom prefers the stolid but boring Mr. Wisley (Laurence Fox), the wealthy nephew of the monstrous Lady Gresham (Maggie Smith), a nearby neighbor who is a minor aristocrat with much wealth. The opinionated Auntie considers dear Wisley her favorite and as her ward he’s in line to inherit her vast estate and fortune, which makes him a good catch. Jane does not find the unimaginative Wisley appealing and turns down his proposal. When nagged by her mom, she replies she plans to earn a living “by my pen.” That sounds fine, except the film offers no indication that the character saying those noble feminist independent-minded thoughts is indeed a writer.

Due to the conventions of the society in which Jane lives, she finds that the road to marry for love is bumpy and instead what is deemed more important is social standing and family obligations. Therefore like her heroines in books such as her most noteworthy 1813 one of “Pride and Prejudice,” Jane finds herself at the mercy of her fate.

The film does drive home the point that there were limited options available to women of that period and that is was risky for Jane to turn down such a wealthy proposal, but the story is so juice-less and the dialogue so dry that the sole pleasure I got was in gazing at the fancy costumes and taking in the lush grounds of the snobby Lady Gresham’s estate. 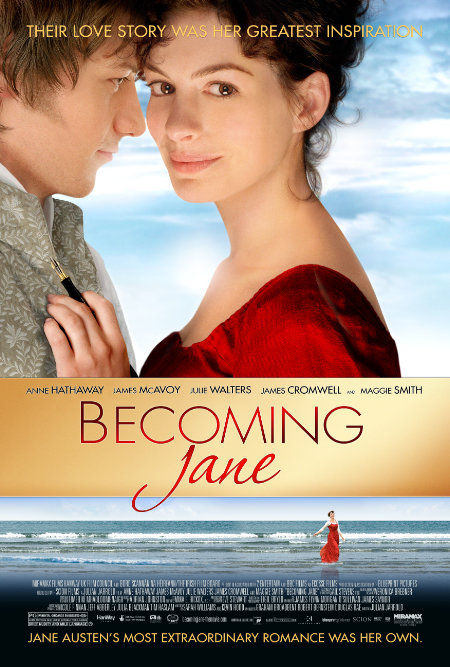