Sidney Salkow (“Sitting Bull”/”Chicago Confidential”) handles the action scenes well, in this predictable Western shot in black and white. It’s a riff on the ‘Cain and Abel’ motif. It’s based on the story by Gerald Drayson Adams. Adams and Richard Schayer co-write the screenplay. In 1879 cavalryman Chad Santee (Buster Crabbe) is mustered out of the 7th Army. On the stage back to his Laramie hometown, he falls for saloon singer Rose Fargo (Ann Richardson) and protects her from the unwanted advances of the slimy gambler named Blackjack (Jimmy Seay). Chad plans to become ranch partners with his brother Jubal, someone he hasn’t seen in six years. But Chad’ plans are dashed when he learns his brother is the leader of the Nighthawk gang, and is responsible for killing three stagecoach drivers and robbing the gold shipment of the stage he was on. They meet in the gang’s hideout and Jubal lets Chad flee to Jackson Hole to be a fur trapper, but the jealous Indian squaw (Lita Milan) squeals to the sheriff (Roy Barcroft) where the gang is hiding and during the raid tells Chad that it was his brother who betrayed him. When the gang is wiped out the posse, survivors Chad and the ruthless halfbreed, Shawnee (Michael Ansara), trail Chad and Rose to Jackson Hole. Chad and Rose have married, and the two outlaws hire a few gunslingers to take the furs from Chad. But Chad convinces Jubal he would never betray him and the two join sides in a gun fight with the fur thieves, whereby they win but Jubal dies in the gunfight. 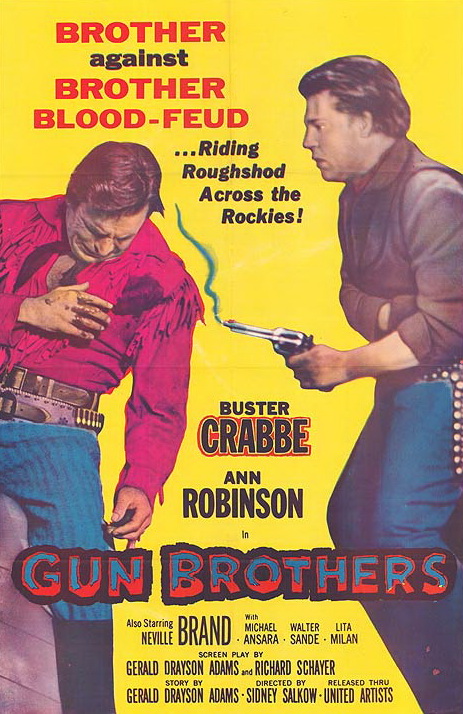