“Essential Loach viewing for those who still believe in the cause.”

Acclaimed leftist filmmaker Ken Loach (” Riff-Raff”/”Bread and Roses”) presents an urban drama based on real events and one that is made to outrage your sense of injustice perpetrated on the workers. It is written by first-time screenwriter Rob Dawber, a former railroad man who died before the film opened due to work-related lung cancer. Dawber made it a heartfelt, sympathetic portrayal of a group of railroad maintenance workers getting screwed when privatization occurs. The railroad is being sold off in pieces to private companies, so things become chaotic as competition makes things even more complicated when the men try to do their job.

The film opens with the British Rail sign being replaced with the new one reading “East Midland Infrastructure.” Little did the men realize how significant that change was to be. A field supervisor informs them of a long list of changes that the new bosses demand. The close-knit group of men horse around with a wry sense of working-class humor, thinking this is one big joke as the new policy calls for new safety requirements and efficiency measures so that customer satisfaction could be promoted. The employees are told there’s now a “clean slate” and old procedures for work conditions and promotions no longer applies–in other words, their many years of service have been effectively erased. In a “mission statement” ordered from the top, the workers will undergo a series of changes that their union reps have no more say over: they will now have to clock in and out, there’s no more guarantee for anyone of a lifetime job, and it’s mandatory that they attend viewings of training films that have little to do with the realities of their job but are filled with meaningless buzzwords and catchphrases.

Soon the close camaraderie between the men is fractured, as the awful realities of the new regime begins to hit them. Everyone from the old bosses on down has to get with the new agenda or risk being fired. Working for less pay and made to feel unwanted and unappreciated and demeaned, some men take the offer of a severance pay and get out while they can. This leaves the workers in the featured workplace depot site down to a small number, as their job future suddenly seems uncertain. Their end comes when the top bosses decide they are no longer viable and lets them all go.

The final act shows how callously shortsighted these new policies were, even though they sounded so good about making the railroad better. The men are now contracted out through agencies, yielding all their benefits and worker’s rights, and these contractors cut corners endangering the men more than ever before while providing less safety for the customer. But this random workforce saves the private company lots of money in guaranteed salaries.

Loach focuses on three points of view of how the men reacted. A fiery redhead named Mick (Thomas Craig) gets banned for complaining about safety violations when he is forced to become a freelancer. Paul (Joe Duttine) struggles against all odds to earn a decent living wage while taxed with heavy child-support payments, as he opts to freelance. Gerry (Venn Tracey), the veteran union rep remains on, but soon realizes things have worsened beyond repair.

It all builds to a fatal accident involving one of the freelance workers, as Loach in an emotional rather than didactic way makes his case against privatization.

Though dramatically not a great work, it’s still essential Loach viewing for those who still believe in the cause–one with a social and political conscience. The actors are a mix of professionals and nonprofessionals, and give a convincing naturalistic performance. In additition, the realistic locations are gritty and add to the film’s authenticity. 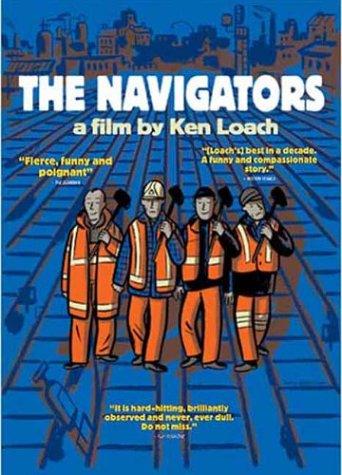