“The imperfect teenager fairy tale for the 1990s.”

An amusingly exploitative “B” movie by writer-director Matthew Bright (Guncrazy screenwriter) about a white trash family and their abused teenage daughter, Vanessa Lutz (Reese Witherspoon), who goes on the run rather than go back to a foster-care shelter when her mother and stepfather are arrested.

“Freeway” plays with the “Little Red Riding Hood” fairy tale motif to make it fit into modern-day California and its plethora of dysfunctional families. Little Red Riding Hood is none other than the resourceful Reese who is up against a serial killer wolf (Keifer Sutherland as Bob Wolverton), while going to see a grandma she has never met and is not sure her grandma would even know her. Grandma represents an ideal for the troubled girl who has a long juvenile arrest record and faces a bleak present, never mind a bleak future!

The film opens as Vanessa is in her special education class and pathetically can’t read the sentence on the board ‘The cat drinks milk.’ She kisses her black boyfriend Chopper (Bokeem) after class and when she arrives home the police raid her parents’ motel room and arrest her mother (Amanda Plummer) for prostitution and possession of drugs. Soon her stepfather (Michael T. Weiss) is arrested for parole violation because of the drugs in the apartment. Rather than go back to the children’s shelter Vanessa cuffs her welfare care worker by the ankles to the bed, steals her car, says goodbye to Chopper and gets a gun from him as a parting gift, and then heads for the freeway and grandma’s Stockton house.

On the freeway Vanessa’s car breaks down. A stranger named Bob stops to help and by not showing her his sharp teeth, he seems to come off as being a nice man. Bob tells her the car has had it, and offers a ride to Los Angeles and further tells her that he is a counselor for emotionally disturbed boys. He willingly listens to her tale of woe. She likes him and even trusts him completely, and is quite willing to tell him her life story. Evidently, no one has ever listened to her before and she feels good about this confessional talk until Bob starts wanting to know about the explicit sex she had with her stepfather, and she smells a wolf. Bob turns out to be a serial killer who has been in the local news, wanted for killing a number of prostitutes on the freeway where he is known as the I-5 killer. After he pulls a razor blade and cuts her ponytail and calls her the kind of slut that he must kill, she pulls a gun on him. When he tells her to let him go but take his money that no one would believe her word over his, she gives him one more chance to redeem himself. But he refuses to take Jesus as his Lord and personal Savior as she requests, so she sprays him with bullets.

Vanessa is arrested for attempted murder when she enters a diner all covered in blood and the staff calls the police. The disfigured Bob makes it barely alive to the hospital and fingers her as the culprit, when the police question him. Bob becomes the source of parody as the doctors piece him back together, whereby he can’t talk clearly and looks grotesque and has holes in his throat so that when he smokes the smoke can be seen coming out of his throat.

Vanessa tells the two detectives exactly what happened. But, of course, they do not believe her. When she calls Chopper, she finds out that he had been shot dead by drug dealers. So, Vanessa enters a juvenile detention facility, accepting what happened to her without any noticeable signs of depression, even laughing at the victim during her absurd trial. A trial takes place that makes chop-suey of how the Establishment pursues justice, where usually the best story heard in a case wins the decision. Vanessa didn’t come up with the best story — that takes money and a smart lawyer.

The prison scenes were over-the-top, trashy, and fun to watch, as the director did not care a damn about drama. The film shoots for tongue-in-cheek humor and it also aims to cast some black humor on the social hypocrisies of the welfare, judicial, and penal systems. As satire, this film is tops.

Reese Witherspoon’s energetic performance was contagious. The film had enough toughness in its commentary about education, the courts, and dysfunctional families to be viewed as a thought provoking.

The film had a lot of little things going for it that added up to big plusses. The opening credits were creatively presented. It had the Grimm fairy tale story of Little Red Riding Hood depicted in its cartoon drawings. The Brooke Shield’s role of the righteously indignant wife of the killer was a satisfying part for “The Blue Lagoon” girl, as she shows how she has matured as an actress. It should also be noted that the detective partners, one white (Dan Hedaya) and the other black (Wolfgang Bodison), show how prejudicial they can be when investigating a crime. It is not until after the black officer finds that Reese is a coal-burner (one who goes out with blacks), that he goes out to the scene of the crime and investigates the case the way he is supposed to.

“Freeway” has the look of a crazed fable, as bulky onscreen figures are made to look less imposing at each impending event and the vulnerable ones either die or get stronger just by surviving amidst such violent chaos. The film draws to its inevitable conclusion–of blood and gore, despair and muted hope, and the irrelevancy of the 1990s in trendy California. The film’s sordid family scenario depicts how cartoon-like are those teens left to their own vanities, as they are frolicking in an artificial landscape of alienation and violent gestures. This is the imperfect teenager fairy tale for the 1990s, where for the bored students reading and writing cannot replace violence, loud music and drugs. 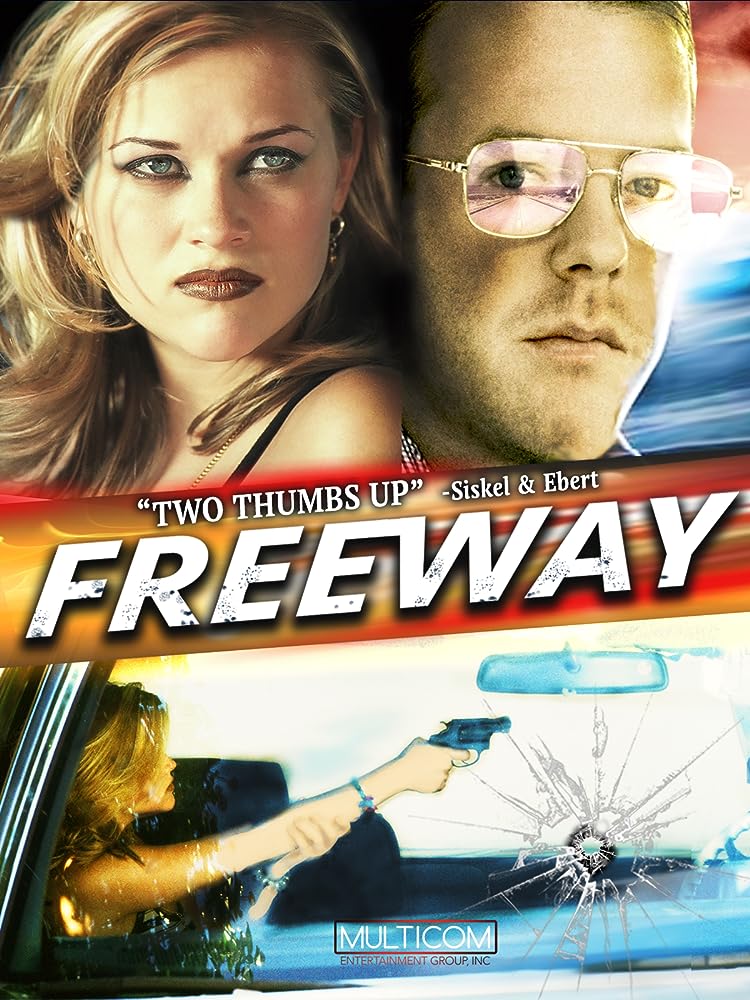