END OF THE GAME, THE (RICHTER UND SEIN HENKER, DER)

An existential mystery story about a wealthy industrialist who got away with a murder some thirty years ago. The police commissioner, Hans Barlach (Ritt), and the businessman, Richard Gastmann (Shaw), were young men, in love with the same woman–Nadine. Gastmann made a bet with Barlach that he could kill her and get away with it. He punched Nadine and she drowned when she fell into the sea.

At present, in Berne, Switzerland, Walter Thschanz (Voight) is called back from his vacation to help the dying police commissioner Barlach solve the murder of a policeman (Donald Sutherland), who was working undercover, on a special assignment for the commissioner, to spy on Gastmann at his country estate. Barlach, in the meantime, is most concerned with his stomach trouble. Barlach will have to undergo an operation in a few days just so he can live for another year. Therefore, he tells the aggressive and ambitious Walter to take charge of the case.

Barlach’s grumpy demeanor, the strange circumstances of the case, and the unsettling Swiss countryside, add a noir feel. Barlach’s guilt over the ridiculous wager he made as a young man lingers; it was a time, he reflects, when he did something immature he would never do at a different stage in his life.

Sutherland, the murdered policeman, is found with a bullet through his head while he is slumped down on the seat of his car. He had just left the home of Gastmann as an invited party guest where he assumed the role of a history professor, in which he fooled no one. But he was able to gain access and meet romantically Gastmann’s attractive mistress, Anna (Bisset).

Barlach, when snooping around Gastmann’s premises, is attacked by his South African dog, which he shoots. The wily Barlach has things all sorted out from here on in — as the story becomes a chess game, with a surprise ending and much questioning about matters of guilt and innocence.

Martin Ritt, the noted film director, plays his Barlach part with all the right quirks and nuances. He reminded me a lot of Peter Falk’s Columbo. Voight is a good counterbalance to Ritt and to Robert Shaw’s one-dimensional Nazi-like villain role. Ritt is able to bring an energy into the investigation, something that makes the implausible situation seem a little bit more plausible. But the ending, when all the game plans come together, just didn’t add up. It seemed as if the story tried too hard to make sure that man’s sense of justice won’t be mocked anymore. 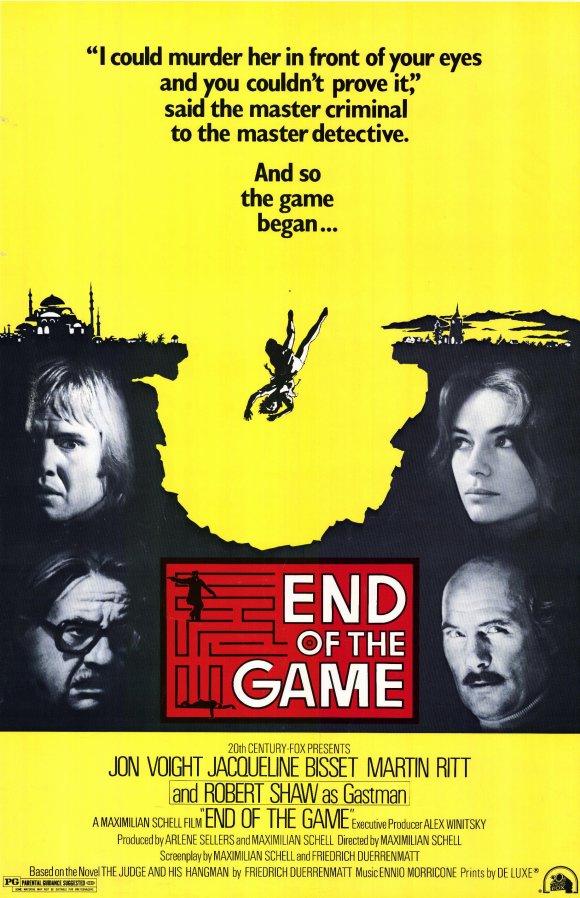