Easy Rider is the seminal film of the Sixties. It’s a fascinating film even though it’s now a dinosaur, leftover from a Sixties that no longer exists except as nostalgia. It caught my interest when I saw it at its theater release date and some thirty-eight years later when it’s no longer relevant I still find it a curious watch, as it covers the collision of the counter-culture with the establishment and its priceless myopic underground view on the American landscape scene of dope, rock and bikers.

Two free spirits from L.A. on luxury motorcycles–Captain America (Peter Fonda), garbed with the American flag on his back and on his helmet, the cool Don Quixote of the duo, and his jumpy and crude Sancho Panza-like sidekick, Billy (Dennis Hopper), sporting long hair and an unkempt mustache and decked in pioneer buckskins with a white bone necklace around his neck–score cocaine in Mexico and sell it at the border to a drug dealer (Phil Spector) seated in a Rolls Royce. The boys hide their nest egg in their cycle’s gas tank, throw away their wrist watches and, thinking they are free at last with no more money woes, travel cross-country to catch the Mardi Gras in New Orleans, which is a week away.

On the way, they are invited to lunch by an amiable white American rancher (Warren Finnerty) who married a Mexican and lives off the land with his large religious family. The bikers give a ride to an adventurous hippie (Luke Askew), who takes them to his romanticized commune in the wilderness (somewhere in Arizona’s Monument Valley) where the city-raised hippies solemnly try to bring in a crop in the sandy terrain of the mountains by sprinkling it with seed. In a small Texas town, the bikers join a parade but get arrested for parading without a permit. In jail, they meet the young town drunk, George Hanson (Jack Nicholson), a self-effacing lawyer, from a well-to-do family, who can’t help acknowledging with contempt his mediocre life. He’s cheerful, good-natured and has a good sense of humor, and differs radically from the townies as he finds the bikers interesting and is not turned off by their appearance. When they all get released from jail, the square George dons his old football helmet he wore in college and joins them on their trip to the Big Easy (wishing to visit a high-class bordello) and smokes grass for the first time.

The trio stops off at a backwater Louisiana diner and abruptly leave as they are verbally assaulted by the patron rednecks and the sheriff. Sleeping in the woods at night, they are attacked by these same rednecks and George is bludgeoned to death. The boys reach New Orleans in time for the Mardi Gras and go to George’s cathouse of choice, The House of Blue Lights, and then drop LSD with the prostitutes (Karen Black and Toni Basil) at the site of a cemetery. Suffering from a bad Fat Tuesday acid trip the boys exit New Orleans for Florida, but a martyred death awaits for them on the highway by approaching redneck hunters in a pickup.

America’s senseless violence that plagued the unruly times with political assassinations, the Viet Nam War and the Civil Rights movement dividing America, is expressed here through the fine graphic photography by Laszlo Kovacs (he replaced cinematographer Barry Feinstein, who was banged over the noggin with a guitar by a freaked-out Hopper). No deep meanings can easily be gleaned from the script by Hopper, Fonda and Terry Southern, or from the many ad-libbed scenes, since the two rebel heroes are either inarticulate or too stoned to say things that don’t sound spacey. The power of the film is in its heartbreaking death scenes contrasted with its lush scenic vistas, showing an America that has both the good and the bad.

The low budget film was made for $555,000 and ended up grossing more than $60,000,000 worldwide. It’s directed in a naturalistic way by Dennis Hopper (“Colors”/”Backtrack”/”Out of the Blue”), who was supposedly hysterical for most of the shoot and had a testy relationship with Fonda that was never healed. In his directorial debut, Hopper somehow had it in him, even though stoned most of the time, to make a solid commercial film that reveals the main characters’ egocentric ways (on and off screen) and their fatalistic views, and somehow reveals that the turbulent Sixties and its anti-establishment climate would affect great changes on the country but would not correct its wrongs. Its appeal is far from universal but, nevertheless, it has been acclaimed by many as the ultimate “road trip” movie. Though it ends in tragedy, it does celebrate the beauty of the rural Western landscape and leaves one with the hope that a diverse America can become a better nation. The great iconic rock soundtrack features songs by the likes of Steppenwolf, The Electric Prunes, The Band, The Byrds, Roger McGuinn, Jimi Hendrix and The Holy Modal Rounders. 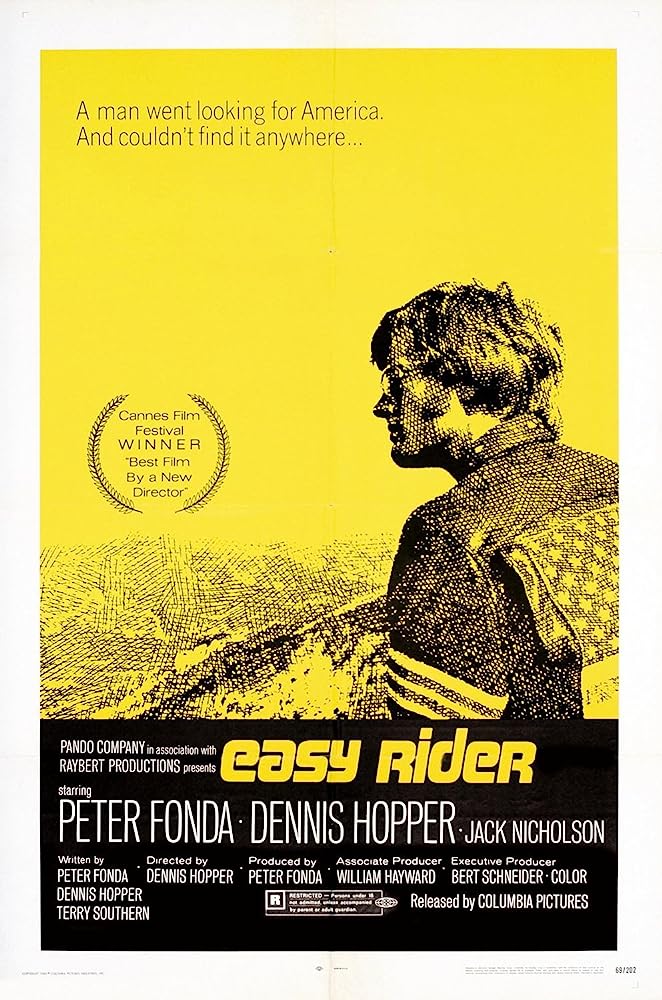