French-born director Lucile Hadzihalilovic (“Evolution”/”Innocence”) adapts this eerie nightmarish tale from the British sci-fi writer Brian Catling’s surreal novella into a plotless, enigmatic film that keeps you wondering what’s going on. The screenplay written by Hadzihalilovic and Geoff Cox keep the viewer in the dark

It’s set in an unnamed area of Europe shortly after WWII.

Albert Scellinc (Paul Hilton) is a middle-aged man, formerly with the military, who earned the nickname of Earwig. He shares an apartment with a little girl named Mia (Romaine Hemelaers), who is not his daughter. Her teeth are made out of her saliva, and she has some kind of contraption in her mouth so she can keep making new teeth. The two do not speak. The girl is not allowed to leave the premise unsupervised, and is not familiar with the outside world. The silence in the house is sometimes interrupted by a phone call, where the caller, called Master, asks only from the hired handler: “How is the girl? And how are the teeth?” On one call he mentions that they are taking the girl on a mysterious trip.

When Mia is outside ready to go into the car to go into the city, she puts her face in the nearby pond as she sees her reflection in the water. We notice she’s being watched by a woman named Celeste (Romola Garai) from a nearby footbridge, accompanied by a handler named Laurence (Alex Lawther). She has one cheek that’s been chewed apart by a dog.

It ends with an uncertain climactic train ride through the European countryside, where it seems like both the girl and the woman will be facing something horrible but the viewer will not witness it.

I must say I was unable to make heads or tails of this film except for it being an allegory that was evoking in me the fears for displacement many survivors felt after WWII. It’s a unique, strange and bleak art-house film, one that blew me away as my mind raced with thoughts of the Holocaust. When I try thinking of what film it reminds me of, I think of Resnais’ Last Year at Marienbad (1961). 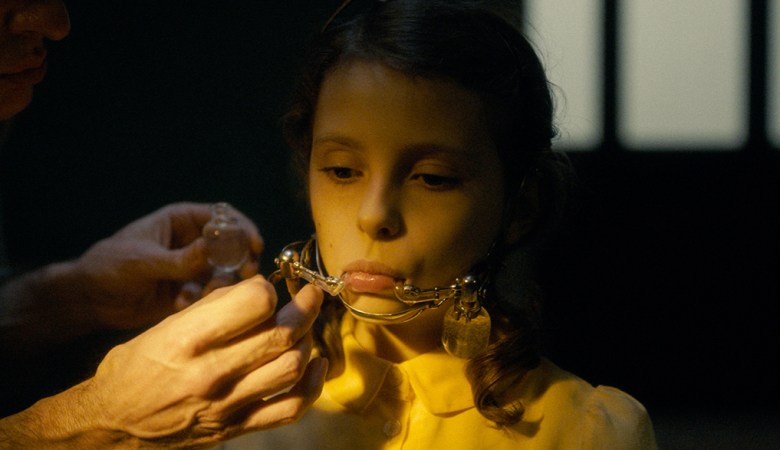 IN THE GOOD OLD SUMMERTIME