DRUMS ACROSS THE RIVER

“It might be routine and the plot is shaky, but it hits on all the genre’s expected tropes with plenty of oats.”

Nathan Juran (“Tumbleweed”/”The Deadly Mantis”) directs in a fast-pace, keeping the action going despite plot holes, a familiar Indian-themed western from a weak script by John K. Butler and Lawrence Roman. It was adapted from a story by Butler. The rich 1950s Technicolor, however, made for a pleasant view. The always reliable decorated former war hero Audie Murphy is surrounded by a fine supporting cast, with Lyle Bettger excellent as the nasty villain and Jay Silverheels makes for a good Indian. Its weakest part is the tepid romance between nice girl Jennie (Lisa Gaye) and nice guy Audie-it never had any sparks. It’s set in the dying mining town of Crown City, Colorado, in 1880. The only gold is on Ute Indian territory, across the San Juan River. Gary Brannon (Audie Murphy) partners with his dad Sam (Walter Brennan) in running a struggling small freight company. In desperation, Gary and the respectable town founder, Nathan Marlowe (Emile Meyer), get in with a bunch of deceitful white strangers, led by the ruthless Frank Walker (Lyle Bettger). The baddies want to grab the Ute gold by running them off their land for breaking the peace treaty, and are willing to start an Indian war to get their way. The peace treaty has left the Utes and their peaceful chief, Ouray (Morris Ankrum) with the gold, and they refuse white visitors on their land. When he dies, his son Taos (Jay Silverheels) acts with the same wisdom. Gary has never gotten over his hatred of the Utes, after one of the chief’s sons for sport killed his mom. The chief and Sam brought justice to the incident when the chief killed his son Indian-style as punishment. But things get ticklish when Walker’s men pull off their evil deeds and it’s up to Audie to redeem himself and get over his bigotry to stop an Indian war,. The locals are confused and don’t understand how Walker, his thuggish brothers and the gunslinger Morgan (Hugh O’Brian), have tricked them into turning against the Brannons and in being used to start a war with the Utes. It might be routine and the plot is shaky, but it hits on all the genre’s expected tropes with plenty of oats. 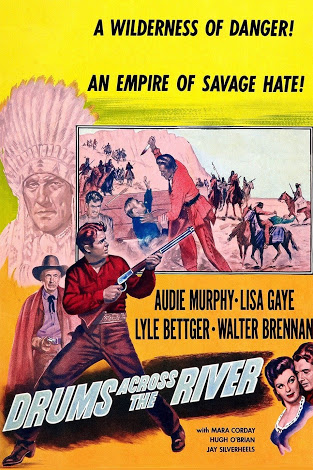 JUST ANOTHER GIRL ON THE I.R.T.