Legendary 79-year-old French filmmaker Jacques Rivette (“Celine and Julie Go Boating”/”L’Amour Fou“/”Out 1“)directs this well-acted literary period drama based on the 1834 novella La Duchesse de Langeais by Honore Balzac. It’s set in the 1820’s Restoration-era in Paris (Napoleon is in exile and a Bourbon king sits on the throne), as it presents a twisted nuanced melancholic love story of customs, etiquette, sexual desires, grand balls and manners taking place in the upper-class salons.

The film begins in 1823 on the barren Mediterranean island of Majorca in Spain, at the cloister of the order of the barefoot Carmelites. A visiting French general goes to a lot of trouble getting the approval of the cloister authorities to visit a French woman in the order known as Sister Theresa. We soon learn that five years earlier she and the general were involved in an obsessive non-consummated relationship that mysteriously ended with her disappearance, which made him more determined than ever to find her again and be with her as lovers. But their conversation in the cloister cell is ended when the nun cries out to her nun chaperone that he was once her lover.

In flashback, we retrace the steps that led to the ill-fated romance between the nun and the general.

Themarried coquettish socialite aristocrat Antoinette de Langeais (Jeanne Balibar)is bored with her comfortable orderly life when she meets at a society affair the ailing gimpy heroic figure of the Napoleonic Wars, General Armand de Montriveau (Guillaume Depardieu), an adventurer who recently escaped from an African prison after being held there for two years. The Duchesse begins a calculated flirtation with the socially awkward Marquis over a period of a few months that turns perversely ugly as both egotists can’t stand to be rebuffed. Montriveau is made to look foolish in chasing after the elusive socialite, as he never fully understands the social rules of the drawing rooms and is inarticulate when it comes to the banter required in the love game. Antoinette at first has the upper hand, as she gets off feeling good about herself seducing the easy prey and then rejecting his advances. The humiliated Montriveau seeks revenge by initiating with his drinking buddies a military-like kidnapping of her to win her over in a power struggle, something he does understand. But things go wrong, and the complexities of love and desire make what should be simple something that is far from simple. Their painfully ridiculous love affair ends ironically as perversely as it all began.

Pascal Bonitzer and Christine Laurent’s austere quiet screenplay is faithful to Balzac’s novella, often using direct quotes from the book in its inter-titles.The supporting actors, part of Rivette’s regulars, Bulle Ogier, Michel Piccoli and Barbet Schroeder,add colorful support to the cat and mouse love games.Undoubtedly, it was well-made and came off as an intelligent costume drama, but it never seemed like a pic I had to see nor one that was more than a tasteful tale with little emotional drive nor was it a film that had much to say about life or history that seemed to matter much. 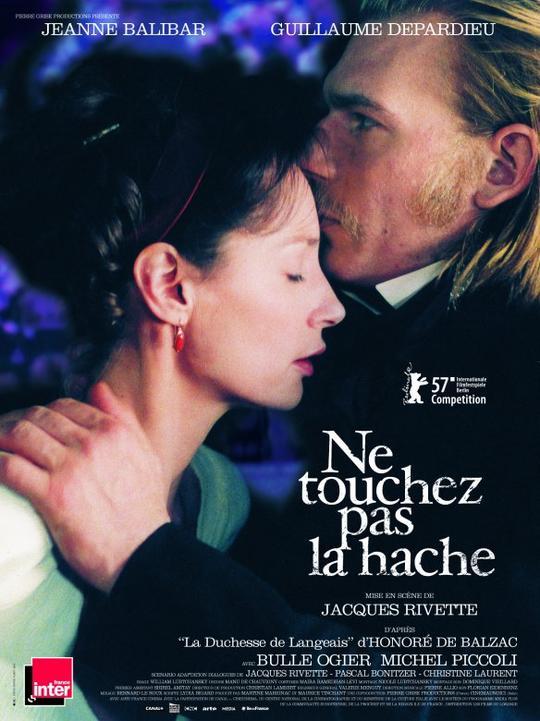