“The best POW film ever.”

This amazing film by Robert Bresson (“Pickpocket”/””Diary of a Country Priest”) is based on the true story of a French Resistance fighter’s escape from imprisonment by the Gestapo in the Montluc fortress at Lyon. It’s told without embellishments, stripping things down to the bare essentials and with great detail; it was inspired by the memoir of Andre Devigny, a devout Catholic French Resistance fighter sent in 1943 to the infamous Lyons prison where supposedly 7,000 of the 10,000 prisoners jailed died. The simple story is elevated to high drama and a meditation on freedom, existentialism and spiritual matters (calling for a spiritual rebirth that is necessary for all mankind to see their way home). It fully captures the intensity of prison life and its strange sounds coming from inside and outside the prisoner’s tiny cell, making its stark and frightening reality something rarely captured on film. It’s the best POW film ever. That it was so real can be attributed to Bresson himself being imprisoned in an internment camp for 16 months starting in March of 1940 during the German occupation of France. It’s the kind of astonishing film that inspires faith, maybe even from atheists and humanitarians, alike, that there’s an invisible higher force at work that looks after the innocent (it’s also a remainder of Joan of Arc being driven by the voices she hears). Bresson has said it’s not exactly a religious meaning he gave to the prison experience, that faith is not the subject of the film but that “I tried to make the audience feel these extraordinary currents which existed in the German prisons during the Resistance, the presence of something or someone unseen; a hand that directs all and causing such a thing to succeed for one and not another…The Spirit breathes where it will.” The miraculous escape stands as an unexplainable mystery. Each person must arrive at their own conclusion about what hope there is and what meaning can be taking from such confinement; each according to their own experience and attitude.

Lieutenant Fontaine (François Leterrier, a Paris philosophy student) tries to escape when transported by car to the Lyons prison, but is quickly recaptured and severely beaten by the German guards. Bloodied but not bowed, the prisoner carefully calculates his escape–which seems like an impossible task, but a necessary one since he’s informed that he’s sentenced to die for espionage activities.

Fontaine befriends just about every inmate he could in the prison. A stranger named Terry (Roger Treherne) passes under Fontaine’s window each day and Fontaine chances passing him his notes which Terry gives his visiting daughter to smuggle out of the prison. He offers a despairing priest (Roland Monad), who is lost without his Bible, a pencil to write down his religious tracts. He comforts as best he can a suicidal old man named Blanchet (Maurice Beerblock), who has given up all hope. In the meantime he diligently gathers equipment, discovers weaknesses in the German security system and finds a way of getting out of his cell just as time is running short before his execution. But a tension arises when a new prisoner, a 16-year-old, named François Jost (Charles Le Clainche) becomes his cellmate and he immediately suspects him of being a spy. Using his intuitions after intensively talking with him and building up a relationship, which some critics suspect was a gay one, he trusts Jost and the two escape together.

This soulful, austere and lyrical prison drama is told without emotion and contrivances, giving it an air of authenticity and purity that few films ever achieve. It was shot entirely with a non-professional cast and on location at Fort Montluc. 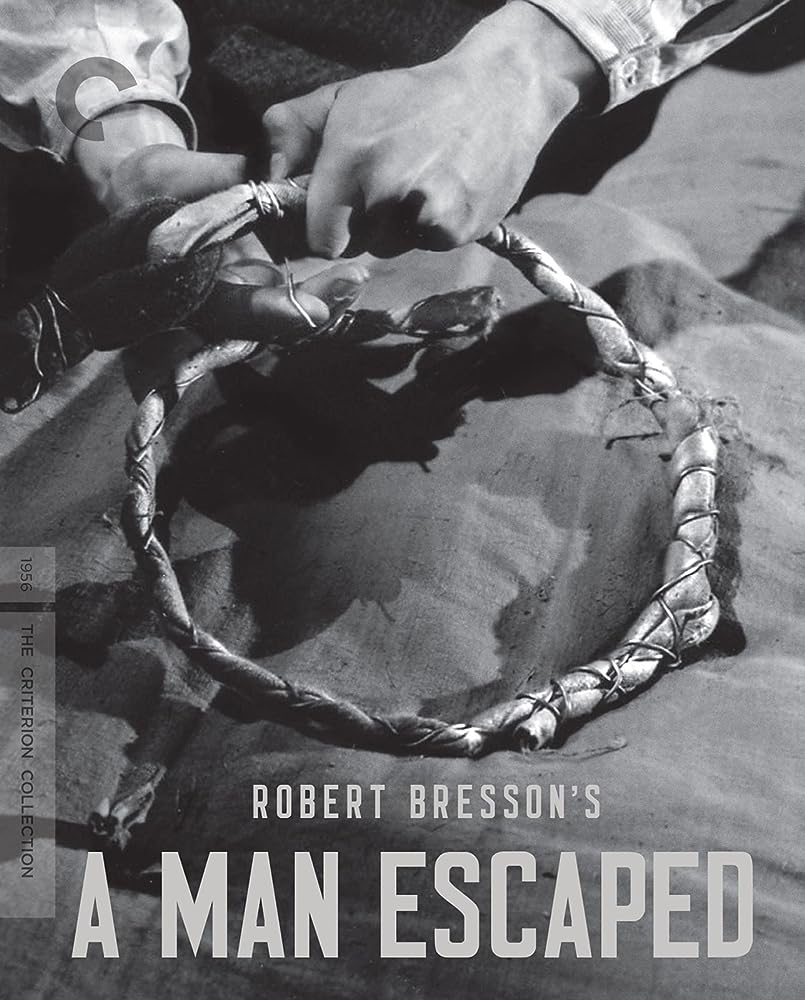