“It just turns out as an intellectualized meal of hatred and violence and half-baked ideas.“

Dogville is a bitter allegory of failed Christian hospitality and Old Testament revenge. It plays as a retooling of Thornton Wilder’s Our Town, with Brechtian deconstructionism of character breathing heavy into the sparse theater set. It’s aimed to be provocative and shocking and possibly anti-American (which may or not be true, and bears no sense of importance as to my critique–for me the film is more misanthropic than anything else). After being mired in tedium for most of its three hour length it suddenly hits you over the head with its cynical concluding message about all human nature being inherently self-serving. Dogme director Lars von Trier relates America’s goodness to dogs (the town is named Dogville and there’s a dog named Moses-an obvious religious reference-who barks at strangers and is unseen until the apocalyptic final scene). “Dogville” pokes fun at America for thinking of itself as a folksy country made of small-town God-fearing and law-abiding regular folks. Von Trier goes out of his way to point out that its people whether in the corrupt cities or small towns are no better than dogs, but probably a lot worse since they should know better and be held responsible for their bad side. The film is shot in its entirety in the Copenhagen studio on a bare soundstage, where the town is drawn in chalk on the floor and the actors simulate door knocks and honor invisible barriers. John Hurt acts as the narrator, who in a caustic sober voice that smacks of pretentiousness feeds us all the dirt taking place.

It’s set in a fictional former Colorado mining town of only 15 adult citizens secluded in the Rocky Mountains during the 1930s. The narrator informs us that it’s on a dead end road, has an abandoned silver mine, and an Elm Street that runs through its center–whose name was given by a sentimental soul from the East Coast even though the street never had such trees. Grace (Nicole Kidman), whose name has an obvious religious connection, is a mysterious beautiful young woman on the run from gangsters who suddenly appears in town on the Fourth of July to the sounds of gunfire that breaks the town’s tranquility. She is welcomed by the town’s moral leader, an aspiring author and pompous philosopher and smug do-gooder curiously named Tom Edison Jr. (Paul Bettany)–a reference to one of America’s icons. He is attracted to her beauty and vulnerability and appoints himself as her guardian, and pleads her cause to the locals at a town meeting. She appeals to the townspeople to find it in their hearts to help her hide from the mobsters. Some are fearful of the gangsters, while others are wary of a fugitive stranger in town. But they vote unanimously to let her stay after giving her a two week trial period to see how she behaves, while Tom hides her in the abandoned mine he fixes up as living quarters. When the gangsters appear, they give him a business card with their phone number and offer him a big reward if he tips them off to her whereabouts. But Tom assures her that is not his intention. Tom also suggests that she should show her appreciation to the locals by working for all of them in exchange for their trust in her, which is at first for nothing then at slave wages. She at first wins over the citizens by performing good deeds, but things change when the law posts wanted posters for her as a missing person and the locals begin to have misgivings about why she is so good to them. Some of the so-called good citizens include Tom’s opinionated and hypochondriac father, the retired town doctor (Philip Baker Hall); the inhospitable to outsiders shopkeeper and gooseberry maintaining lady (Lauren Bacall); the vain lonely blind man (Ben Gazzara); the bitter wife of the apple farmer with the spoiled son (Patricia Clarkson); the two-faced town beauty who welcomes another attractive lady in town because it takes attention away from her (Chloë Sevigny); the treacherous truck driver (Zeljko Ivanek); the hypocritical religious mission lady who plays the organ (Siobhan Fallon Hogan) and the rotten apple farmer (Stellan Skarsgård).

Warning: spoilers in the next two paragraphs.

Grace endures the townspeople’s false piety, ugly gossip, their greed, their using her as a slave, and their threats to rat her out if she’s not compliant. But things worsen even further as the season wears on when the apple farmer rapes her and not only does no one defend her but they blame her for his actions. She’s so overcome by grief that she wishes to leave this so-called ideal community, but the truck driver fools her into thinking he will give her a ride out of town and instead rapes her. The saintly woman is returned to town and made into an unpaid prostitute for all the men in town but Tom, who is bitterly denying himself the pleasure he yearns. To further degrade her, Grace is yoked slave-like in a dog collar so that she can’t escape. The big disappointment is that Tom sides with his neighbors. The repressed man shows his true selfish nature by turning her in to the gangsters for the reward, as his wishy-washy morality and initial good intentions are put to shame by her true virtue of goodness.

Since Grace spends the entire pic enduring the over-the-top suffering in the same artificial way the heroines in von Trier’s Breaking the Waves and Dancer in the Dark, it comes as a surprise when at the conclusion she lets go of her martyrdom by noting there’s hardly any difference between gangsters and good citizens. She comes out of her debased female role and exacts her revenge on the phony townies with the help of the returning gangsters. James Caan is the mob boss who arrives in a black Cadillac and does his Godfather thing, as he dishes out what goes for American justice.

Von Trier looks down upon all these characters as puppets, with him pulling the strings; while his camera does the same — peering down from above to observe the characters as if they were specimens under his microscope. It’s all staged, as the emotions never registered as real suffering but only as actors playing a part. The Danish director who has never visited America (due to a flying phobia), presents his idea of what America is like and does it an audacious way that tells us more about von Trier’s need for showmanship rather than his true convictions or anything deep about America or capitalism. I don’t know what his beliefs are, but this film is of no help in setting the record straight. It just turns out as an intellectualized meal of hatred and violence and half-baked ideas, and offers a table full of goodies that have nothing more nourishing to offer when fully digested.

Incidentally, Shirley Jackson’s “The Lottery” covers the same territory in a more literary and poignant manner by featuring an idyllic New England town which holds an annual ritual to stone one of their citizens to death. So I wouldn’t automatically say that one of the film’s main virtues is its originality and freshness, as some film critics have suggested. 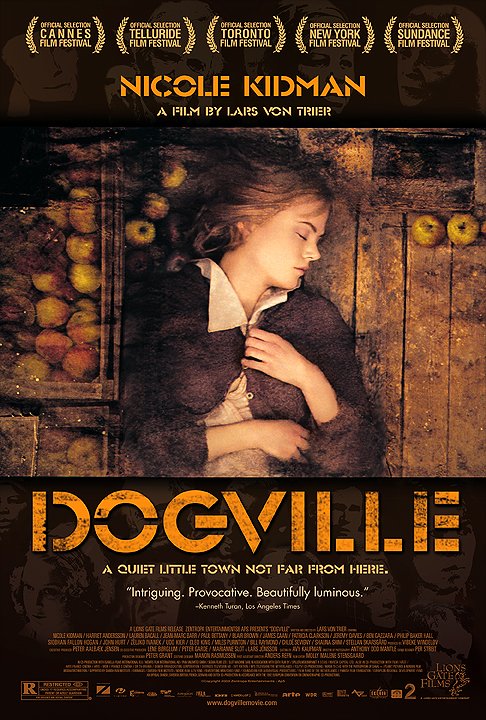